Between freedom and fear

By By Greg Hurd

Sometimes there is a strange comfort in risks taken.

Perhaps it is action in the face of fear that brings one's freedom into full flower. Deeper still, perhaps, it is giving voice to a truth that would otherwise be forced to remain within, silent. 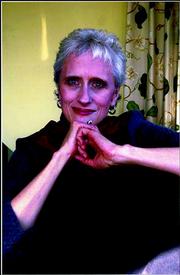 But the voice of freedom can prove costly.

Sara Paretsky, a 1967 Kansas University graduate, has, in her 11th and latest V.I. Warshawski novel, "Blacklist" (G.P. Putnam's Sons; $24.95), placed her detective on a finely-honed edge between freedom and fear, speaking and silence.

At once a classic whodunit and a cautionary tale for today, "Blacklist" immerses the reader not only in the crucible of post-Sept. 11 America and the Patriot Act, but also in their historical parallels: the "Red Scare" and the McCarthy-era.

V.I.'s actions could trigger the potentially muting, isolating impact of the Patriot Act on her life while her inaction would assure the continuation of the irony that the perpetrators of injustices old and new would remain free.

V.I. is summoned from her post-Sept. 11 numbness by her most important client, a wealthy Chicago scion, to investigate lights in the attic of the former family estate, now supposedly unoccupied. There, V.I. stumbles into the depths of an ornamental pond where she finds the body of an investigative journalist.

The journalist's death is dismissed by the local police as at worst a suicide, at best an accident, and the family of the deceased hires V.I. to find the truth.

Like streams flowing to a confluence, the search for the truth behind the lights in the attic and that for the solution to the mystery of the journalist's death lead to the same river.

Throughout both of V.I.'s investigations, the truth remains just out of reach, at each approach receding into the shadows behind political, social, class, racial and ethnic barriers. And the search summons her to investigate the past, unearthing ties to the Federal Theatre Project and its offshoot, the Negro Theatre Unit, and the House Un-American Activities Committee -- all the while under the ominous cloud of the Patriot Act.

To achieve this blend of historical, political and social relevance, Paretsky mixed many streams of thought and experience in the writing of "Blacklist."

Mystery writer Dorothy Salisbury Davis and her late-husband shared friendship and stories with Paretsky about their ill-treatment in the McCarthy-era and the resulting poverty they endured. They also introduced Paretsky to their neighbor, a daughter of the director of the Federal Theatre Project, Hallie Flanagan.

Kansas University Chancellor Robert Hemenway's biography of Zora Neale Hurston provided some of the history of the period.

Even closer to home was Paretsky's personal experience of the Red Scare as a 6-year-old in first grade at Cordley School in Lawrence.

"Our teacher pulled down this map of the world, a Mercator projection, and pointed to Russia. It was this huge orange mass on the map, and she said, 'Look at them. Look how big they are compared to us, and they want to destroy us, and we have to do everything we can not to let them destroy us.'"

And then there was Paretsky's father, whose department at Rennselaer Polytechnic Institute in Troy, N.Y., was investigated by the House Un-American Activities Committee. Soon thereafter, Paretsky and her family moved to Lawrence, where they lived with "a certain nervousness."

Despite the investigation, Paretsky's father, an immigrant, was passionate about American history and the freedoms won through the Revolutionary War. Each Fourth of July, he would take the family for a walk and tell the story of the revolution and the Declaration of Independence.

Who do you trust?

Paretsky believes America's revolutionary history and its freedoms constitute "what we all want America to be," but at the same time we are also "a country of fear," she says.

Throughout "Blacklist," Paretsky nimbly plays out these themes of freedom and fear relative to Sept. 11 and the Patriot Act.

For Paretsky, Sept. 11 created "an atmosphere of terrible anxiety and a sense of 'who do we trust,'" making trust "the problem of these times."

In "Blacklist," V.I., in dealing with a suspected terrorist, is compelled by circumstance to question who she can trust and on whose judgment she can rely.

And the risks involved for V.I. are increased by the new element in the equation, the Patriot Act, which serves to hamstring her long-time allies while at the same time isolating her.

V.I. must walk the line between freedom and fear alone. In the choice of whether or not to protect the rights of someone who may be a terrorist, she faces the legal might of the Patriot Act and its potential consequences.

Deftly, Paretsky has placed V.I. in the unwelcome position of having to decide which nation she will embrace: the nation of fear or the nation of freedom.

Sara Paretsky's "Blacklist" is V.I. Warshawski at her best. She is at the apex of her detective skills as well as her mental and emotional strength, all of which are marshaled as she battles her most formidable adversaries to date.

"Blacklist" is everything one could hope for in a first-rate mystery novel and much more. For cloaked in this mystery is a cautionary tale for our times spoken by a voice reaching out in trust not knowing who can be trusted.

Two streams, their confluence the course of our national will. They ask, will we be a nation of freedom or a nation of fear?

In "Blacklist," Sara Paretsky has asked this hard question of us all.