How do you hold the attention of 1,200 or so elementary school students for 90 minutes, while making them sit and behave? It may sound like an impossible task, but for Ric Averill, it's all in a day's work.

No, he's not a magician.

He's a writer. A playwright, to be exact.

A Kansas University graduate with a bachelor of fine arts in music composition and a master's in children's theater, Averill's job is to educate, inspire and entertain children using theater.

It's not always easy.

He has learned some very valuable lessons from his audience while working in the theater since the early 1970s.

"Children are a very honest audience," he says. "It is an audience that really responds from the heart. They respond directly from what they see and how they feel. If you don't have that audience, you will lose them and they will check out."

He's hoping that won't be a problem when his latest show comes to Lawrence. Averill developed an operatic version of the classic Hans Christian Andersen tale "The Emperor's New Clothes" for the Kennedy Center's New Visions/New Voices program. A touring company will perform the show for Lawrence school children Oct. 14 at the Lied Center.

"I sent them a scenario, a basic story line. A trio and an aria. Some musical sketches," Averill says of getting his work commissioned. "Eventually we heard back and they said yes, they wanted to develop it. It is a great honor."

Ric Averill, Lawrence theater director and playwright, watches a rehearsal of "Macbeth" in late July at the Lawrence Arts Center. Averill, who specializes in children's theater, enjoys the challenge of keeping young audiences engaged with material that has universal appeal. But, he says, "The bottom line is that good theater is good theater."

Although the world of opera was new to Averill, creating the show allowed him to combine several interests.

"Doing this opera is sort of coming full circle," he says. "It combines the music composition that was my love in my undergraduate work with the children's theater work I have done over the years since then."

Even though it is a classic fairy tale, Averill found many story elements that lent themselves well to the operatic tradition. Leaving much of the classic story in tact, Averill added traditional vocal aspects of opera: The ingenue is the soprano; the emperor is the baritone. Most of the musical action is delivered through various arias, duets, trios, quartets and quintets.

"Opera is a comedy. It takes the whole idea of grandness and largeness and explores that within the confines of this sweet little fairy tale," Averill says. "Because it is kind of a one-trick-pony of a fairy tale, there is a classic romantic subplot that really fills some of the expectations of opera."

Producing works for children's theater is a unique experience. As opposed to adults, who choose to attend plays, children often are exposed to theater through school field trips. Averill acknowledges the challenge that situation can pose, but his end goal is always the same.

"The school audiences are the one place where you have the entire spectrum of American people. You have to make sure it will appeal to all groups of people," he says. "The challenge is to find material that has something that has strong universal appeal and will be entertaining. But the bottom line is that good theater is good theater."

Averill, a father of two, has produced and written plays for children's theater on both the local and national levels. Appealing to the ever-changing tastes of children can be an arduous task, but for Averill it's as simple as getting in touch with his inner child.

"I try to keep in touch with children," he says. "I also gravitate toward things that grab the 10-year-old in me."

In the past, when Averill has been unable to channel the child within, he has used the interests of his own children for inspiration.

"After telling my daughter about Amelia Earhart, she questioned me while on the Pacific Coast," he recalls. "She asked me, 'Is that the ocean Amelia Earhart fell into?' When we returned home, I wrote a play about Earhart."

Averill also enjoys writing plays for children because of their playful imaginations; his work relies on the constant wonderment of children.

"Kids play," he says. "They are not foolish; they know it is actors, but kids are willing to suspend disbelief." 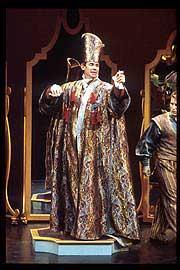 The Emperor admires his new duds in the Kennedy Center's New Visions/New Voices production of "The Emperor's New Clothes." Lawrence playwright Ric Averill wrote the operatic version of the classic Hans Christian Andersen tale, which is coming Tuesday to the Lied Center for school performances.

Since entering KU in the late 1960s, Averill has been a staple to the theater communities in Lawrence and the surrounding area.

He, his wife Jeanne, his children and their troupe of actors performed improvisation, sketches and melodramas at Apple Valley Farms, located near Perry Lake.

"It was a wonderful, fun run for 20 years," Averill says of the time he spent performing there. "We miss it very much."

Despite the national acclaim he has received, Averill is content in his own paradise.

"In Lawrence we are able to build up a relationship with many people in the community that is really invaluable," he says. "We receive so much support. We are lucky we are able to live here and still work nationally.

"We met and fell and love with Lawrence. It is our Camelot on the Kaw."