Paris — Stella McCartney has an answer for an uneasy world: Go light.

The wispy dresses in earthy greens were long off the hip, creating a flapping, flowing movement with the models' every step. A ballet dancer would feel at home in these outfits.

After her show in an ornate hall of the Paris Stock Exchange, McCartney said she had imagined rummaging through an old stockpile of fabrics to put together a soft-toned collection.

"I always had this fantasy of having a great, great grandmother and discovering her chest of old fabrics," she said. "Once they were really bright, vibrant colors that after 40 years were dulled down."

One unabashed fan said McCartney is coming more into her own.

"It was fabulous. She goes from strength to strength" said Paul McCartney, the designer's father, who was on hand with his very pregnant wife, Heather. "It's getting better all the time."

Chiffon and cotton voiles were often layered, handbags were laden with metal trim accents, and colored sunglasses had designs of butterflies in motion.

But McCartney only gave a gentle nod to the lepidopteran motif. Across town, Valentino went heavier on the butterfly theme, using it on shoulder broaches, prints, and even sandals.

The Italian designer's approach also included light, lacy themes, but was generally more sober, including gowns or dresses that would wear equally well at work or on a night in town. 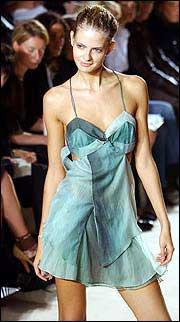 "Valentino has elegance," said Naomi Campbell, who graced the catwalk in outfits including a turquoise evening gown covered with shell pendants. His styles "feel like the old Hollywood, like in Elizabeth Taylor movies," she said.

Designer Tom Ford showed a penchant for low cuts, giving the fashion house's legendary women's tuxedo a white vest that opened up from the navel. Heels seemed almost invariably stilettos, many in black and white with crystal-looking insets.

Among the more colorful pieces were a scaly dress in golden paillettes, and a comfortable, close-fitting dress in a sharp tangerine tone.

Colorful embroidery was in full display, at times hinting of ancient Egypt. Nifty leather-strap skirts looked like they had been through a paper shredder.

"It was a little bit of the jovial sailor, a little bit of goddess or Cleopatra -- whatever," Jacobs said. This was a "younger, sexier" feel than the "architectural, sturdy" flavor of a year ago.