Getting the most out of food

When's the last time you went to the market, purposely sought out locally raised ingredients -- organic salad greens, free-range chicken, artisanal cheeses -- consciously, lovingly prepared a nourishing meal and sat down to enjoy it with a glass of wine and the company of good friends?

If you're like most people, you might have to scratch your head and strain to remember such an occasion. Because these days, for many of us, food has come to be seen through the lens of convenience.

Meals are eaten standing up in the kitchen, grabbed at a fast-food, drive-through or in chain restaurants where the dish you're eating is simultaneously being served, in uniform exactness, at hundreds of other outlets around the nation.

There's got to be a better way to live. And indeed, there is.

Tens of thousands of people around the world are joining the Slow Food movement, founded in Italy in 1986, as an alternative to the fast-food lifestyle and the homogenization of taste.

Today the organization devoted to the celebration of culinary traditions and the pleasures of eating -- called Slow Food -- is active in 45 countries and has a worldwide membership of more than 65,000 people. In this country, there is a large Slow Food USA membership, with 5,500 people joining the movement.

"People have responded to the growing movement because they have become tired of buying the same things, eating the same foods and living the same lives," according to the Web site of Slow Food USA.

"With these interests in mind, our mission is to create a robust, active movement that protects taste, culture and the environment as universal social values."

Put another way, the philosophy of Slow Food "seeks a rediscovery of authentic culinary traditions and the conservation of the world's quality food and wine heritage."

In fact, they say, these beliefs have already existed here for years.

'Slow all their lives'

Tom King started a Slow Food convivium -- a local chapter of the movement -- in Lawrence about two and a half years ago.

The idea was to get people who are passionate about food together for discussions, trips to area food producers, and sponsorship of special events such as wine-pairing dinners that highlight the Slow Food philosophy.

"There was nothing like that in Kansas (at the time). We had 24 people. Our local membership was farmers, wine makers, bakers, cheesemakers and a couple of restaurateurs. I finally shut it down -- it just didn't fly," says King, chef at 815, formerly Raoul's Velvet Room, 815 N.H.

The Lawrence convivium met three times during the course of a year and a half before its eventual demise.

Part of the problem was that the Lawrence convivium came to be overshadowed by one formed last November in the Kansas City area, which has zoomed to a membership of 70 people.

Tim Quillin, left, chef de cuisine, and Richard Garcia, sous chef, use locally grown vegetables to prepare a dish at the Community Mercantile Co-op in Lawrence. Employees at the Mercantile support the Slow Food organization which is devoted to the celebration of culinary traditions and the pleasures of eating.

But there was something else at work, too.

"The people who were in our group are what Slow Food is all about, and they have been slow all their lives. Is there really a need to join a group? There isn't. These are the people," King says.

"The philosophy is still here, and all of us are still friends, and we are just talking about other ways of doing it."

Members of the Lawrence convivium also balked at the cost of belonging to the Slow Food organization. Yearly membership fees are $65 for one person, or $75 per couple and include "The Snail" (a newsletter) and "Slow," the organization's magazine.

Although the Lawrence convivium no longer exists, the ethos of the Slow Food movement lives on.

"The philosophy is incredibly sound. It supports an awareness of traditions we may lose, the way our lives are cluttered with junk food and stress. Slow food is an alternative to that. It makes you stop and think about what you're doing," says King, previously the chef at PrairieFire: An American Bistro, 724 Mass.

"I think that some of it has to do with people working a lot and being uneducated about how basic and uncomplicated preparing their own food can be. A whole generation has been raised on processed food that comes already prepared," says Teller, food service manager at the Community Mercantile Co-op, 901 Iowa.

"Lots of folks don't know the first thing about putting a pan on the stove or preparing a piece of meat or fish."

How, ideally, should food be enjoyed? 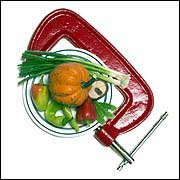 "My grandmother in Greece had a little kitchen outdoors, a fireplace with a chimney on the outside of her house. Some of the best meals that I've ever had in my whole life, I had in that kitchen. It was fresh, simply seasoned and satisfying."

Nancy O'Connor belonged to the local convivium, too. Like Teller, she bemoans a culture that increasingly seeks sustenance at fast-food joints and chain restaurants.

"I think it's sad, because there's so much we lose. Preparing food and sharing food is an art, a place where families and people build relationships and are nourished and nurtured. We all give that up so casually because we're busy," says O'Connor, the co-op's nutrition and outreach director.

Lawrence restaurateur Chuck Magerl shares in the criticism of the commercial food industry that sets the tone for America's eating habits.

"Our food has been sourced from the lowest common denominator. Our food system has gone to the lowest price -- the cheapest this, the easiest that. Unfortunately, those choices have come at the loss of freshness, flavor and in some instances actual loss of genetic diversity in crops and livestock." says Magerl, proprietor of Free State Brewing Co., 636 Mass.

Free State tries to use locally raised products in its dishes, including Magerl's own, home-grown tomatoes.

He's a fan of what the Slow Food movement is trying to accomplish.

"Food plays such a huge part in how we go through our daily lives, and if we can make those experiences into something that connects us with our local ecosystem and agriculture and our heritage, then it is a plus factor," Magerl says.