Do not pass go, do not waste $20 and go directly to another game...ANY other game.

There's nothing worse than stubbing your pinky toe on a concrete block. Well, there wasn't until Celebrity Deathmatch was released. 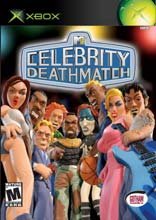 At first I was excited about this claymation brawler patterned after the old MTV show. There were many possibilities of fun mayhem to be had given a solid gaming engine. What resulted was a half-cocked miserable mockery of several fighting games.

From the start you are treated with low-quality recordings of the main theme with a generic blah interface likened to shareware from download.com. Jump in to Episode Mode to play actual episodes from the show. That sounds cool, right? No. Controlling Mr. T or Carrot Top feels like moving a cow with that stubbed pinky toe. Controls and all attack buttons seem stiff and completely unintuitive. I guess it was designed for button mashers, but even they wouldn't feel like they are controlling much of the action.

In theory, the object is to bash your opponent senseless and eventually kill them in a style suited to the character, just like the show. However, the finishing moves aren't even funny to watch, unlike the show.

The roster of celebs include Jenny McCarthy, Marilyn Manson, Mr. T, Carrot Top, and few others. Not enough interesting celebs to actually warrant a rental.

The look is dull. Celebrity voices are imitated poorly. Not even funny for caricatures. Nick Diamond and Johnny Gomez provide the color commentary that is more accurately described as four shades of gray. Within one match they are already repeating themselves.

You can create a celebrity, but why? The whole point was the celebrity angle. Alas, the heads, torsos, etc. are all pre-made which makes customization limited despite the plethora of categories.

Gotham Games went over its budget and delayed the release to fix many "bugs." They foresaw disappointment in the lack of characters so they stuck it with a $19.99 price tag. Unfortunately that would still be ripping you off.