Pat Metheny continues to forge new reasons why he is K.C.'s most renowned guitarist 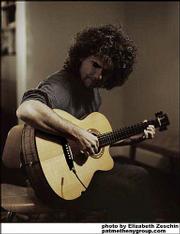 Pat Metheny is touring with a trio that includes bassist Christian McBride and drummer Antonio Sanchez. Metheny also has released a solo album, "One Quiet Night," performed using only a baritone guitar.

Jazz is often divided into the traditionalists and the risk-takers.

Pat Metheny passionately considers himself a proud member of the latter set.

The Lee's Summit, Mo., native has been releasing acclaimed albums for nearly 30 years, each one a new wrinkle in the development of jazz.

Although best known for his freelance ventures and work with the Pat Metheny Group, the guitarist has enjoyed numerous collaborations, ranging from such stylistic stalwarts as Dave Brubeck to fellow experimentalists Herbie Hancock and Ornette Coleman to pop music idols David Bowie and Joni Mitchell. And he's dabbled in the world of film and television, composing soundtracks for features that include "The Falcon and the Snowman" and "A Map of the World."

Along the way he's racked up an astonishing 15 Grammy Awards among dozens of nominations.

Currently, the multitasking Metheny is embroiled in several projects. The most prominent is his current live tour, which brings him to Lawrence for the first time in a decade. For this incarnation of the Pat Metheny Trio, he is joined by virtuoso bassist Christian McBride and drummer Antonio Sanchez.

Metheny is also supporting his new solo release "One Quiet Night," which features the nimble-fingered musician wrestling with a baritone guitar. The project originated while simply fiddling around with the unconventional instrument and recording jams onto his home computer. But after listening back to these impromptu tracks, he (and Warner Bros.) decided to release the collection as a proper album.

Included on "One Quiet Night" are his intricate takes on Norah Jones' Grammy sweeper "Don't Know Why" along with the classic Gerry and the Pacemakers' hit "Ferry Cross the Mersey."

Speaking from a tour stop in Annapolis, Md., the 49-year-old Metheny is delighted to be returning to the Midwest, where his love of jazz and appetite for musical experimentation were first cultivated.

Q: How much did growing up in the Kansas City area help shape your musical abilities?

A: It's gigantic on many levels. The first level is just the general feeling and vibe and spirit of everything out there. I think it's somewhat lost on people who live there all the time and stay there. But for people who leave, you do get this point of reflection at a certain moment -- a year or two or three after you're gone -- where you sort of start to appreciate the unique beauty of the area, but also the special qualities that make it something quite different from anywhere else ... The central thing for me is that there was so much musical activity in the Kansas City area that I got to participate in, starting from the time I was 13 or 14 years old to the time I graduated high school. And it's continued even after I've been gone. I still have pretty strong connections with a number of musicians out there. It's a very unique style of playing that people have out there that I was completely indoctrinated in at a very impressionable age. It was absolutely a magnificent environment to develop in.

Q: How important is it to constantly be pushing the boundaries of musical expectations?

A: It's important if it's a natural condition for one's development. I don't think it's something you can simulate. I don't think there can be innovation without this thirst or curiosity or hunger to do it. There are many people who are quite content to just play -- play in "the tradition" or however they want to play. That's fine, but it does seem like there's a certain percentage of musicians who are really curious about music in a broader sense. For those kind of players, just playing GOOD isn't enough.

Q: With all the emphasis in modern music on loops and keyboards and samples, has the guitar lost any of its prestige?

A: No. To me, the different colors that are available to instruments are just that: They're colors in this paint box that allow you the possibility of enhancing your storytelling capacity. But the story is what counts. The tools, the implements, the techniques, the technology -- they're like way, way, way down the list in terms of what's important. The same basic qualities that are at work now when a musician is applying himself or herself to music are identical to what they were 400 years ago. Nothing has really changed. And nothing will EVER change. Melody, harmony and rhythm are massively infinite subjects, and all three really need to be present for the level of storytelling that we know is possible through music to be effective. Whether you're doing it on a 50-cent kazoo or a loop or a saxophone is really immaterial to the success or failure of its storytelling impact.

Q: You now have a whopping 15 Grammy Awards. What do awards mean to you?

A: It's very exciting when you get some kind of acknowledgment from other musicians or people within your zone of work. At the same time, I kind of allow myself the excitement of it for the evening, then the next day I forget about it and just move on. I do think there's a danger in sitting around counting your accomplishments or awards that is anti-productive. I appreciate it and am actually quite thrilled when something happens like that. But then the next morning I'm like, "OK, what's next?"

Q: Where do you keep all those Grammys? 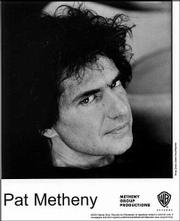 A: It's a pretty good band. Actually, it's an exceptionally good band. Christian McBride has really made a spot for himself in the jazz history books already, and he's only like 30. He and I have been playing together for the last 12 years or so and I've always felt a real kinship with him. He's got the same kind of expansive approach to jazz that I have, and he's been somewhat lost in his generation ... He was always somebody who embraced the full range of opportunities that the process of jazz offers. The drummer is Antonio Sanchez, who has been the drummer in my regular band for the last couple years. He was the guy I thought would never be born. He's really the drummer of my dreams.

Q: What can you tell me about the baritone guitar used on "One Quiet Night?"

A: It's sort of halfway between a regular guitar and bass guitar, not just in terms of pitch and timbre but also in size. It's pretty hard to play.

Q: What inspired the cover of Norah Jones' "Don't Know Why?"

A: She used to play across the street from me for about three years -- there was a little bar there. I would go in and there would literally be me and four other people. She did that tune often. I thought, "Wow, what a great tune." I sort of learned it by just hearing her. Then the rest is history. Suddenly, it's this HUGE thing. It made me think I might have a future as an A&R man.

A: It's difficult for me to gauge; I don't keep score. But there's the records and there's the playing. In terms of playing: absolutely. When I first started making records and being on the scene, I'd only been playing the guitar for about five years. Now I've been doing it for about 35. The range of options I have on a microsecond by microsecond basis are infinitely more expansive than when I started out.