Futuristic racers have had a mixed reception in recent years. Back in the PS1 days, Wipeout was extremely popular as was F-Zero on the Nintendo platforms. Both were solid for what they wanted to do. The Wipeout franchise deteriorated as the F-Zero franchise got stronger and then game along XG1 and XG2 for the Nintendo 64, bringing weapons and Tron-like bikes to the futuristic racing genre. Unfortunately the game play wasn't strong enough to warrant a second look until XG3 on the next-gen platforms that revolutionized the franchise. Still, XG3's lack of tracks and depth left most wanting more. 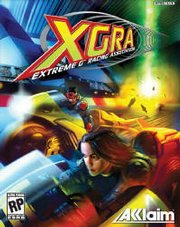 XGRA takes the series a step further and a step back all at the same time. In are plenty of new tracks and circuits and out are the well-tuned racing mechanics that we've come to know in XG3. Turning and cornering feel much more like F-Zero-GX than XG3, which doesn't fit the tracks or the weapons-based combat. As a matter of fact, even though the weapons system has been simplified and bettered in every respect, the sensitive driving mechanics take away from the weapons game play at first. Once you are used to it, it may still prove enjoyable.

Where are my modes? The Season mode is disappointingly shallow and your only other real options are an Arcade mode and Time Trial. We expected more.

Also gone is the blazingly solid 60 fps frame rate that we enjoyed with XG3 that gave it the necessary sensation of speed. In all versions, the frame rate is locked in at 30fps with occasional dips in the GC and Xbox versions, and constant and sometimes dreadful dips in the PS2 version.

That being said the bike models are nice and the track designs are killer and some are among F-Zero GX caliber. The particles used are plentiful and warm, accented with some great draw distances but sometimes blah textures.

The sound is a mixed bag. You get to choose between rock and dance soundtracks. With rock you get poorly written, uninspiring "Rock" music and with dance, you get some licensed music and better racing beats. Even if you are a rock fan like me, choose dance. The engine roars, screeches and weapons all sound as they should; they are merely placeholders and could've been improved upon.

If you are into future racers, then PS2 and Xbox owners may check this out. However, if you are a Gamecube owner that loves F-Zero GX, you'll have no reason for XGRA unless you really look forward to weapons-based combat. Regardless, with the lack of options, customizations and modes, it should get old in its first month.