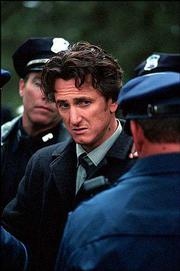 In Clint Eastwood's Oscar-winning "Unforgiven," a young gunfighter justifies a revenge killing by telling his veteran partner, "I guess they had it comin.'"

Eastwood's character replies, "We all have it comin', kid."

That statement stands as the binding theme in the filmmaker's latest work, "Mystic River." Throughout this stark, brooding drama, the working-class residents of a Boston community are bound by the sins of their past.

For his 24th directorial effort, Eastwood wrangles a number of memorable performances from his acting ensemble. This crime-oriented portrait of characters snared by their environment leads to an excruciatingly powerful buildup ... before it surrenders to contrivance in its final act.

It's tempting to say this is Sean Penn's finest performance in a career filled with notable work. Penn plays Jimmy, the toughest of three childhood friends who shared a shattering incident together. During a routine game of street hockey, a pair of molesters posing as policemen pulled up in their car and convinced one of the boys to go for a ride while the others looked on.

Grown up but living in the same neighborhood, the three have taken different paths to adulthood. Jimmy is an ex-con trying to run a legitimate business along with his wife (Laura Linney) and three daughters. Sean (Kevin Bacon) is now a homicide detective. Dave (Tim Robbins) is marginally employed, married (to Marcia Gay Harden) and raising a young son.

Each of the men is dealing with their own private guilt, whether it's the fact that Sean's wife left six months ago, Jimmy's criminal past has left him emotionally hollow or that Dave is just plain "damaged goods." The implication is that the fateful incident from their youth tarnished each of them in some way.

When Jimmy's oldest daughter (Emmy Rossum) is murdered while coming home from a night out, the three are reunited. Sean takes charge of the investigation and is stunned to find out that Dave may have been connected to the crime.

Vowing to find the killer before the police do, Jimmy vents, "I know in my heart that I contributed to your death, but I don't know how."

Based on Dennis Lehane's recent novel and scripted by Brian Helgeland ("L.A. Confidential"), the story is a standard police procedural on the surface. Yet the movie works as a collection of well-acted scenes that inevitably examine the legacy of guilt.

Clint Eastwood crafts a stark, brooding drama about how a murder in a Boston community dredges up the guilt of the past. Well-acted by an A-list ensemble (particularly Sean Penn), the movie still relies too much on contrivance and manipulation in its final act, leading to unsatisfying answers regarding "whodunit."

Eastwood's best moments stem from how he handles the interaction of his A-list cast. The conversations and confrontations even during uneventful stretches seem weighed down by years of past baggage.

Penn is especially good as the "hard case" who is shown going through the painful responsibilities of making funeral arrangements and picking out tombstones for his slain daughter. These are devastating scenes, and Penn wisely underplays them. It's the highest compliment that can be paid to such a recognizable movie star when one can absolutely forget who he is and wholly view him as a character on the screen.

If only the story matched the quality of the performances.

For a movie so universally praised, it sure surrenders to some significant missteps. (Critics who say "Mystic River" rivals Eastwood's masterful "Unforgiven" need to go back and watch "Unforgiven" again.)

The most cringe-inducing inclusions involve Sean and his estranged wife, who phones him at random and listens without ever speaking a word. Eastwood shoots the actress in extreme closeup so we never really get a clear look at her. The episodes are structured as if when her face is eventually revealed she will be a person pivotal to some other part of the plot ... but she's nobody.

How this couple's relationship neatly resolves provides one of the most artificial segments from any movie this year -- right up there with the pivotal hovercraft duel in "From Justin to Kelly."

Additionally, the silly speech that Dave gives to his wife concerning the vampire flicks he is watching on TV labors too hard to be a METAPHOR about his personal mindset. Analogies like these work a lot better when they aren't completely spelled out as if the viewer is a moron. The scene comes at a time when the movie needs to crank up the tension not the inadvertent comic relief.

But the true miscalculation is the film's wanton manipulation of its audience.

There are too many key elements in "Mystic River" interjected merely to obscure the real crime. Questionable timelines, coincidental blood types and faux admissions of guilt are all presented with the sole purpose of getting the viewer to believe one thing just so the plot can haul out a new way to contradict this.

When the eventual details behind the murder are revealed, the explanation moves into deus ex machina territory.

One can argue that the unifying factor of this drama is not about the puzzle itself, but more the individual relationships caught up in it. However, a movie that is structured like a whodunit has to clearly justify how and why "who done it."

Eastwood may be in love with his characters, but he shows little regard for his audience.