Minneapolis — Author Charles Baxter is from the Midwest. It's where he was born, grew up and taught college for many years. It's where many of his stories are set.

"I'm a writer who happens to have grown up in the Midwest," says Baxter, who is likely to deflect the conversation to talk about French authors when interviewers raise the subject.

"They really want to see you as a hayseed, if they can. It's a hook, and it's easier than finding other elements in what I've written that would tie the story together."

Baxter has moved back to his native Minnesota in time for the publication of "Saul and Patsy," a novel that looks at the isolation of a Jewish man and his non-Jewish wife in a small Michigan town. The book continues Baxter's fascination with two characters he introduced and tried to kill off -- unsuccessfully -- nearly 20 years ago.

"Saul and Patsy" was published to rave reviews in September. The Atlantic Monthly called Baxter's prose "one of the pure pleasures of American fiction." His previous novel, "The Feast of Love," based on Shakespeare's "A Midsummer Night's Dream," was a 2000 National Book Award finalist (he lost to Susan Sontag) and has sold more than 200,000 copies.

Baxter wrote his first story about Saul and Patsy in the mid-1980s. His intention was to have readers fall in love with the characters before he killed them off. "It was a dirty trick, and I shouldn't have done it," he says. The couple appeared to die in an accident at the end of the story.

After the story came out, Baxter was approached by a woman at a literary event in Detroit who grabbed him by the lapel, shook him and said, "You have your nerve, killing off that nice couple."

"And I said, 'Oh, they're not dead.' And she said, 'Prove it!' So I wrote the next story, and then the one after that," Baxter recalls during an interview at his Minneapolis town house. 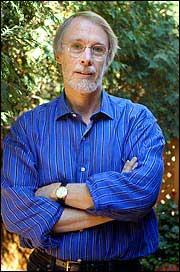 Writer Charles Baxter has moved back to his native Minnesota in time for the publication of his latest novel, "Saul and Patsy," which looks at the isolation of a Jewish man and his non-Jewish wife in a small Michigan town.

Baxter is a soft-spoken, bearded 56-year-old man who wears rimless glasses. He lives in a house decorated mostly in arts and crafts, reflecting his love of the Prairie School and Frank Lloyd Wright, "one of the great indigenous styles of this area." He lives not far from the Mount Curve address where Sinclair Lewis wrote "Kingsblood Royal," and on the shelf in his home are Lewis' books, inscribed by the author to Baxter's parents.

His first taste of rural life came when he moved to Michigan after graduating from Macalester College in St. Paul in 1969. An opponent of the Vietnam War, he had an occupational deferment and taught for a year at an elementary school in the small town of Pinconning near Saginaw Bay.

It was there that Baxter met the man who inspired Saul, who is a teacher in Baxter's book; his wife, Patsy, is a dancer turned loan officer.

"He always made a great joke about someday finding a burning cross on his lawn, and, in fact, what he ended up in was a bowling league and he was completely assimilated to the town -- not that I think he enjoyed it," Baxter says.

In "Saul and Patsy," Gordy Himmelman, a student in Saul's remedial English class, becomes obsessed with the couple. A brutish kid who pencils "MAD IN THE USA" across his forehead, Gordy spends his time standing on Saul and Patsy's lawn, staring at them.

Gordy waves a gun around and eventually uses it when he sees Saul and Patsy standing naked in the window with their baby daughter. Gordy's shocking act inspires a cult of alienated teens, called "Himmels," who visit the couple's home on Halloween, intent on violent tricks.

Baxter sets his story in the fictional town of Five Oaks, Mich., a composite of places in which Baxter has lived. Like Louise Erdrich's Argus, N.D., or Garrison Keillor's Lake Wobegon, Minn., it gives Baxter a place "where everybody knows everybody else," he says.

Baxter's book also evokes the loneliness of small-town life. There is paranoia (Saul thinks a man staring at him is anti-Semitic when he's actually suffering from Alzheimer's disease) as well as haunting images, such as the albino deer that crosses Saul and Patsy's back yard.

Early in the book, Saul disposes of a dead mouse, throwing the tiny body toward a field:

"The blankness of the midwestern landscape excited him. There was a sensual loneliness here that belonged to him now, that was truly his. He thought that fate had perhaps turned him into one of those characters in Russian literature abandoned to haphazard fortune and solitude on the steppes."

Baxter has written "some wonderfully evocative and compelling stories" and is a lyrical writer, says Gary Erwin, director of publications and a lecturer at Kettering University in Flint, Mich.

"He does deal with characters who are very much Midwestern in many ways, but their experiences are universal experiences that people all over the world can relate to," Erwin says. "After he passes on, his work will still be in the American canon."

While Baxter has said "Saul and Patsy" is not about "Goth" culture, he does draw comparisons between Gordy and Mary Shelley's Frankenstein monster -- a creation that becomes monstrous when its creator refuses to recognize it.

"Something may have gone wrong with our kids, and we don't know what it is. That's not to say they should be blamed, just that we need to look at what's happening with them," says Baxter, who has a 24-year-old son.

Baxter never knew his own father, who died when the author was 1 1/2 years old. His mother remarried, and Baxter grew up in his stepfather's house on the site of an old summer hotel on Lake Minnetonka in Excelsior, then a farm town west of Minneapolis.