The estranged husband of Liza Minnelli has accused the superstar performer of giving him the beating of his life -- then doing it again.

"She's stronger than any woman I've ever seen. I'm worried about her health and safety. I just can't believe how strong she is on alcohol," Benanav allegedly told Gest.

Gest says he underwent multiple hospitalizations and takes 11 prescription medications to treat the injuries inflicted on him by Minnelli.

Neither Gest nor Minnelli comes off as a model spouse in the lawsuit.

The daughter of Judy Garland is portrayed as an abusive wife whose boozing made her fists fly with fury. 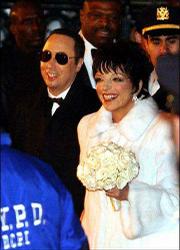 David Gest and Liza Minnelli leave Marble Collegiate Church in New York after their wedding in this file photo from March 16, 2002. Gest sued Minnelli for $10 million Tuesday, accusing his estranged wife of alcohol-fueled violence that caused neurological damage and headaches.

The lawsuit paints Minnelli as "an alcoholic, overweight" award-winning entertainer whose career had been eclipsed by her troubles before she wed Gest on March 16, 2002.

It says she couldn't even get insurance to perform onstage and "was unable to be effectively merchandised."

As for Gest, he admits he would cower at the sight of his wife, running from room to room to avoid her wrath.

And when Gest called the Caron Foundation, an alcohol rehabilitation facility, to seek help, Minnelli "flew into a violent rage," he contends.

The two separated in July, but neither has filed for divorce, according to Gest's lawyer, Raoul Felder.

A lawyer for Minnelli did not return calls, but she seemed to be in good spirits Tuesday at the Carlyle Hotel, where she was seen meeting with executives from MAC cosmetics.

The suit, filed in Manhattan Supreme Court by Felder, charges that Gest suffers from "virtually constant, unrelenting pain in his head," as well as vertigo, nausea, hypertension and insomnia.

It also says that the injuries are long-term and have forced him to hire extra staff to help him put on shows in Hawaii, where he is now living.

Felder said that Tuesday, Gest got 40 injections in his head as part of his treatment.

One alleged beating in Gest's suit stood out:

On June 10, he says, after downing a bottle of vodka, Minnelli came back to their suite at the Connaught Hotel in London and threw a lamp at him, then "began beating (Gest) about the head and face with her fists without relenting" as he shouted, "Liza, stop it, stop it!"

When the couple's guard, Imad Handi, attempted to intervene, according to the lawsuit, Minnelli reportedly said to him: "I have no friends. My husband is using me. I am the star."