Back in the black

When it comes to label hopping, The Gadjits have a promiscuous streak on par with Hugh Hefner's womanizing. The band had already endured two failed marriages (with indie-punk labels Hellcat and Thick) when it hitched up with major label RCA in Sept. 2002.

News of the wedding spread quickly through Kansas City and Lawrence, inspiring platinum expectations and rumors of tours with label mates The Strokes and Foo Fighters. The band even headed to a posh L.A. studio to record its major label debut with ex-Guns N' Roses guitarist Gilby Clarke, sharing pizza and pot with Slash (also of GN'R fame) and hanging out with Skid Row's Sebastian Bach.

And then, before the marriage was even consummated, RCA wanted a divorce.

Former president Bob Jamieson - who signed the band at the suggestion of an A&R guy - left the label to make way for storied music mogul Clive Davis, former president of Arista Records. Not surprisingly, Davis (who signed and developed acts like Barry Manilow, Whitney Houston and Puff Daddy) wasn't interested in working with a rock band from Leawood.

"They proceeded to begin the cleaning out of the label's rock roster in preparation for a whole new era of Clive Davis-driven girl pop," says Brandon Phillips, the frontman for the group.

"This business is built on angst and squashed dreams."

Rather than simply telling the band it was no longer welcome, RCA instead put them through an elaborate divorce proceeding, flying them out to New York City to perform for the RCA staff and putting them up at a five-star hotel in Times Square.

"Immediately after the show we knew it wasn't going to go well," Phillips says. "They had probably made the decision that they were going to put the kibosh on us a couple weeks before ... but they went ahead and spent like $10,000 on airline tickets and hotel rooms to bring us out there anyway, just 'cause they can do that."

"It's like a big welfare state; they just bleed money."

Rude boys
In their 10 years as a band, the Phillips brothers -- Brandon (vocals/guitar), Adam (drums) and Zach (bass) -- have endured as many lineup, label and sound changes as bands twice their age. Even in their teens, The Gadjits outdistanced their peers by packing clubs in Kansas City and signing to Hellcat Records, owned and operated by Rancid's Tim Armstrong.

Back then, of course, The Gadjits sounded nothing like the sweaty, sexually-charged rock band it is today. Though the group often infused its music with soul and R&B influences, The Gadjits were strictly a ska band in a ska scene.

"It was ugly being on a scene label, especially when you decide you don't want to play that music anymore," Phillips says. "There's some kid in Florida somewhere who just absolutely holds the biggest grudge against us, like, we totally ruined this kid's day. He had a fan Website and he turned it into a hater Website."

Phillips says another factor in the musical redirection was a feeling of inadequacy brought on by touring with top-notch ska bands like Hepcat and The Slackers.

"I defy anybody to go out on that tour and open and not kinda feel like you're frontin' the entire time," he says.

So in 2000, after an extended discussion in the bands' tour van, The Gadjits declared an official end to their ska days and set out to be a rock band.

"We started paying attention to what we perceived as our strong points and started trying to find our own voice," Phillips says. "The stuff that people ended up really liking was when we just kid of went berserk, and so the show kind of became more and more about getting ourselves to that place."

Internally, the conversion was a lifesaver. The band developed a whole new set of material inspired by balls-out rock bands like AC/DC and The Who and brought a re-juiced live set to area clubs and house parties. The only ones who weren't digging the new sound, unfortunately, were the folks at Hellcat Records, who declined to put out the bands' third album.

So after making a clean break with Hellcat (the band retained the rights to the songs and released the album independently under the name "Yes I Are"), the group focused on developing its rock chops and brought in two new members -- guitarist Mike Alexander and keyboardist Ehren Starks -- to flesh out its new sound.

The group's self-recorded 2002 album, "Today Is My Day," signaled the emergence of an entirely different band. Despite the lo-fi quality of the recording ("Every time I go back and listen to it I uncover some new sonic abomination," Phillips says), the album did prove that The Gadjits were more than capable of slinging the rock axe.

"Surprisingly, a lot of kids came with us," Phillips says. "This kid said to me the other night, 'It's really cool to grow up with a band.' I was like YESSS! What an awesome thing to say! That's perfect, I love that! Thank you for not making me assume a state of arrested development!"

City of Angels
If there is a silver lining to be found in The Gadjits' brief tenure with RCA Records, it may be the half-dozen songs the band recorded in a professional-grade L.A. studio. For the session, the band hooked up with ex-GNR guitarist Gilby Clarke and a cast of assistant engineers and hired techs.

"When we got to the mixing stage, I was like, 'God, this finally sounds good,'" Phillips says. "It doesn't sound like people beating on pots and pans in a giant oatmeal box ... It just sounds like instruments and people playing them and people singing."

Through he raves about the quality of the recordings, Phillips is equally animated when venting his frustrations with the recording experience.

"All the Los Angeles music professionals pretty much work on a six-hour day," he says. "We'd be like, 'Alright, we're warmed up,' and they'd be like, 'Oh, we're gonna call a dinner break and then call it off.'

"What am I supposed to do with that? You had me put my life on hold for a month to come out to the West Coast and live somewhere where I don't even know where the nearest grocery store is ... but we got to call the recording session off when somebody has Lakers tickets? What the fuck!?"

The band also discovered a second lesson of recording for a major label: there's no shortage of ways to waste money.

"The amount of time that is pissed away in that town on somebody else's dime is ridiculous," Phillips says. "Some dude (a guitar tech) is earning six-hundred dollars a day -- on what's essentially my dime, since it's recoupable out of my royalties -- to not restring guitars, 'cause I'm not breaking strings."

Unfortunately, the L.A. sessions may never see the light of day outside of The Gadjits' Website. A caveat in the RCA contract calls for a huge royalty if the songs are released by another label, and the band has already re-recorded the songs for its next album.

"At least there is spot on my permanent record that says a recording was made that sounds great," Phillips says. "You can imagine my frustration that the only place people can hear the stuff is on my Website." 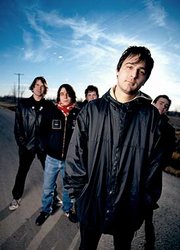 Lifestyles of the rich and famous
One thing The Gadjits were able to carry with them from the session was a slew of memories and a little insight about the lifestyles of rock's upper crust. While recording vocals at Gilby Clarke's home studio, for example, Clarke's eight-year-old daughter frequently popped in to get help with her homework.

"It was totally adorable because it was like homework in crayon," Phillips says. "Here you have this totally cute girl and her dad was the rhythm guitar player for the most dangerous band in the world."

While in New York, the band talked RCA into letting them attend the label's post-Grammy Awards party. But aside from meeting Elvis Costello, Phillips said the party was mostly a letdown.

"The famous people all hide in little boxes off to the side," he says. "There was a gimongous fucking dance floor full of writhing A&R people and their husbands and wives ... and then there's all these little secret rooms where you go hide if you're like Kelly Clarkson or Avril Lavigne."

"You'd think if you were a celebrity and you were always watching your publicity and stuff it would make really good print to hear that Dave Grohl was swing dancing with Kelly Osbourne."

Totally not a major deal
The Gadjits returned to the studio this summer, tracking 14 songs at Kansas City's Berry Music Group studio. Though the band was disappointed to end its affiliation with RCA, Phillips doesn't believe major labels are the end-all-be-all of successful bands.

"The only thing that a major label has is the potential to maybe change your whole day," he says. "Even if we had stayed on and released an album and it had gone gold, I would be shocked if I made more money than a McDonalds manager in a year."

While bands like The White Stripes and The Strokes have shown that rock still has a place on the radio, Phillips is quick to distance his band from the 'Great Rock Revolution of '01.'

"I don't want to put either of those bands down, because I like both of those bands, but there's a lot that they do that we would never do," he says. "There's a certain kind of hipster, kitschy element to all the flagship bands of the Rock Revolution of '01. The sound that everybody seems to be reaching for is extremely Nuggets Box Set."

Even without major label support, The Gadjits draw sizable crowds throughout the country. Years of touring have allowed the band the luxury of booking its own tours and promoting its shows.

"You're not coming to see us now for scene credibility," Phillips says. "No matter if there's ten kids or ten thousand kids --- so long as we're not just a notch on somebody's white belt, then I'm pretty happy about that."