Nintendo has a long line of AAA titles that always impress no matter how old you are. Save for a few average offerings along the way, you can always count on Nintendo's first-party games to be a knockout. This is one of those few average games. 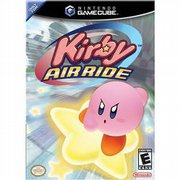 Developer Hal Laboratories, best known for Super Smash Bros. Melee, got the nod to develop this odd little one-button battle-racing game starring Kirby. You use A to brake, A to swallow your enemies, A to pick up items on the track, A to use them and A to boost.

There is no acceleration as you are already moving. None of the controls are that intuitive, which defeats the purpose of having a simple setup. However, once you get used to it, the races are mildly entertaining. Timing your boost/brake around corners works well, but the top speed crawls along so slowly you'll wonder how you are in first place all the time.

Poor, albeit colorful, track design also contributes to the suppression of fun. Not to mention that if you let go of the controller, you will still finish most races with a few bumps along the way. There is such a thing as too simple for its own good. This is what Kirby suffers from.

You do have several craft to choose from that work better for turns, speed and performance, but none of this really adds too much considering the shallow racing mechanics.

Top Ride mode allows for some decent fun on a top-down 2-D experience, but stutters still from the jam-packed A button limitations. The arena/Deathmatch mode "City Trial" has the most potential to be fun, picking up weapons in a pro-roaming environment, chasing down opponents Mario Kart style. But again, the one-button limitations make it too quirky to fully enjoy.

The worst part is that this was the first LAN game for the Cube. Not a smart first move. Luckily Mario Kart should redeem the LAN efforts.

The graphics are slick, clean and bright with enough detail to get the job done but not to wow. The music is solid with great orchestrations likened to SSBMelee. The sound effects are just glorified bleeps and blips however, which please on a purely sophomoric level.

Unfortunately this is one of those rare times when Nintendo strikes out. Great ideas from the start. Great anticipation by fans. Underwhelming execution.