Outside of Halo, Rogue Squadron II was one of the most impressive launch titles for the next-gen systems. The game took advantage of the Gamecube's hardware early with great textures, a solid frame rate and, more importantly, awesome lighting effects. Rogue Squadron III had a lot to live up to. 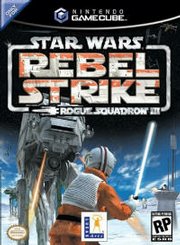 For the most part, it matches the fun factor of its predecessor in the flying missions. The trouble comes in the new modes on foot. One minute you are flying and then you have to complete a third-person action mission.

Enter a fist full of yuk.

You can jump, duck, roll and shoot while a bad auto-aiming feature takes a hold of most of the action. From far away, you can capitalize on the enemies' bad aim by mashing the A button as fast as you can as your auto aim takes down a whole slew of enemies. That's not fun. When you are in close combat, evading is sluggish and getting the auto-aim onto the enemy you want to kill can be a chore. Add in a poor camera system and you've got a surefire killer-of-the-mood.

Luckily, the level system is designed so that you won't necessarily have to play most of the on-foot missions to complete the game. It almost seems as if Factor 5 (the developer) wasn't confident enough in the new modes either so they made concessions to get around much of it.

Other things that bog the experience down are choppy transitions between scenes in a mission. Things seem to stutter when you take hold of a ground gun, then switch back to the foot mission. The FMV sequences aren't streamlined and give unnecessary black spaces between storyboards. It's like an old man pressing and letting up on the gas pedal repeatedly.

Much of the presentation is very unpolished. The menu systems have been pasted from RSII. The opening music is the same. At least they could've used a different song out of the license. There is so much available to them.

When you are flying, you will enjoy it. There are many more TIE Fighters and other enemies on screen it's easy to marvel at the massive amounts of things on screen. The particle effects are slightly better and the explosion animations are great. The new speeder levels also works well, even if the frame rate stutters now and then.

The new TIE Hunters look incredibly cool. They are fast, sleek and true to the design of the franchise. This is the type of stuff that makes Star Wars nuts drool.

The graphic technology has taken a nice step up, but the lack of fogging and necessary lighting makes it look more like models and not ships blowing up. I am perplexed as to what was lost in the translation. I recognize that the textures on main ships are better this time around, but the overall look is not as nice as RSII.

You can expect the same sound bank from LucasArts as usual. Nothing has changed which stays true to the franchise but also doesn't advance it either.

The unlockables are a great value. You can unlock the entire Rogue Squadron II game and play it through cooperatively with a friend! This alone might be worth the money for some.

This is an overall disappointment, but not so bad as to be missed by hardcore Star Wars fans. Nintendo-ites hoping to be wowed like they were with the predecessor may want to look elsewhere.