A beautiful game bogged down by button-mashing monotony

When I was a kid, I loved the Teenage Mutant Ninja Turtles. I got to see a sneak preview of the whole movie before it came out with my friend Brad, and I would cry if I didn't make it home after school by 4p.m. So naturally, I was looking forward to the rebirth of TMNT with this cel-shaded brawler based off the new animated series. 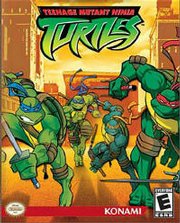 I wasn't expecting much out of the gameplay. I was expecting a glorified version of the old TMNT II: The Arcade Game in the late '80s. That is exactly what we have here. You have a weak, strong and special attack buttons with a dash and various ninja stars to throw. You can unlock different scrolls to learn new special attacks. Groovy.

There are piles and piles of enemies that appear and drone on to a predictable pattern for you to shred to pieces. You can use vehicles and barrels in the foreground as explosives, given enough of a beating. You encounter boss-types that provide a decent challenge and are pretty fun to play.

What isn't fun to play are the later levels, when you realize that the difficulty stems from your lack of moves, including the absence of a block button. Swarms of enemies surround you and there is nothing you can really do to keep from being hit. Its difficulty has everything to do with sloppy AI design.

When that isn't frustrating you, the monotony will. This is a button-masher in its truest form.

The game screams for a four-player mode but unfortunately it is plagued with only two at a time. How friggin lame is that? There is a VS fighting mode but is rather dull and lifeless. No points there.

The graphics beautifully recreate the new cartoon. The FMV cutscenes are ripped directly from the show and there is little difference between that and the game itself!

The sound is a mixed bag. Great background soundtrack from the series, but if I have to hear "Slice and dice" one more time I am going to rip my eardrums out. The fact is, each turtle has a specific phrase that is attached to the strong attack button. They say it almost EVERY TIME YOU HIT THE BUTTON. It's extremely annoying and takes away from otherwise a great sounding experience.

TMNT is what you were expecting. Not too deep, not terribly long and button-mashing fun for awhile. The presentation is awesome and engrossing, but the monotony will eventually get to you.