Before the 60-year-old succumbed to cancer, his son and daughter-in-law shared a precious secret with him: the name of his unborn granddaughter, who shares the initials of his given name, Marlin Dean Anderson.

He died knowing something no one else in the family knew until Madeline Deanna was born three months later.

The special arrangement might not have been possible if the Andersons hadn't had help from Hospice Care in Douglas County during the final week of Dean's life.

"He knew he was dying, obviously," says Suzi Anderson, Dean's wife. "We were able to discuss it. Yes, there were a lot of tears, but he was able to tell us his wishes, which touched all of us in the family, and it helped us be stronger to know that he was OK with dying.

"We as a culture don't do that enough. We make dying a fearful thing. Yes, it was sad, but in a lot of ways it was very peaceful."

Kansas City, Kan., registered nurse Julie Russell knows firsthand the range of emotions dying patients and their families can experience, and she's been exploring them through dramatizations for 20 years. She'll act out three end-of-life situations Thursday evening at the Lawrence Community Theatre, 1501 N.H. Her performance, called "Dying to Tell Stories," is sponsored by the Lawrence Caring Community Council, a 3-year-old branch of the Kansas Life Project dedicated to educating the public about end-of-life issues.

"We really believe the arts can speak deeper and wiser and more fluently to people," says Nadereh Nasseri, committee member and patient care coordinator at Hospice. "We're going to use this medium to let people know what we're all about." 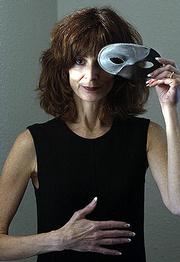 Julie Russell, a nurse and dramatist, will present "Dying To Tell Stories," a series of dramatic monologues that deal with end-of-life issues, at 7 p.m. Thursday at the Lawrence Community Theatre, 1501 N.H. The event was organized by the Lawrence Caring Community Council, a committee dedicated to educating the community about end-of-life issues and groups that deal with them, such as Hospice Care in Douglas County.

"In working with issues that face Hospice patients at the end of life, I see that it's easy to cast a cold eye on dying and death in this society," Nasseri says. "It is a reality that we try to avoid until we are absolutely face to face with it."

Russell's performances are designed to help people confront it earlier. In the first, a poor child needs a bone marrow transplant, but her health insurance won't cover the procedure. Next, a perfectly healthy 96-year-old woman whose friends and family have all died struggles with loneliness. The final scenario features a mother of three who's dying of breast cancer and has grown weary of fighting the disease.

"All of these characters are vulnerable, and most people don't let themselves be that vulnerable," says Russell, a sociology professor at the University of Missouri, Kansas City, who's been involved in theater since childhood.

"If I were to describe the value of the work I do, I would say that drama takes the audience to a different place. The session is no longer an intellectual or an informational exercise. Drama opens up a kind of aperture that allows for a more visceral response and, I would believe, a greater understanding of experiences and attitudes not one's own."

Though Suzi Anderson has already been through an end-of-life experience with her husband and family, she plans to attend Russell's performance. It's only been a few months since her husband died, and she still cries. She gets support from friends and the social worker Hospice assigned to her family. The family has access to the social worker for a full year after Dean's death.

"I had heard about Hospice before we moved here from other people in other cities -- never imagined that we would have to use it -- but it was an experience that was wonderful for everyone, especially Dean.

"I call all those people true angels on earth. I firmly believe they are."

Hospice celebrated its 20th anniversary in Douglas County last year. The nonprofit organization gives care and comfort to people with terminal illness while providing support for their families and loved ones. In addition to the social worker in Dean Anderson's case, Hospice also sent a registered nurse and an aide to the Anderson home and provided access to a chaplain.

This year, Lawrence Memorial Hospital started a Palliative Care Consult Team to assist with caring for terminally ill or dying patients at the hospital. The team came about as a result of the Lawrence Caring Community.

Still, not enough people know about Hospice or palliative care options, Nasseri says. And additional services and education are needed, she notes, including better education for health professionals to deal with pain management at the end of patients' lives, a Hospice House where people can receive constant care at the end of life, education of lawmakers to lend greater support to palliative programs, a turn toward looking at the dying process as naturally and artfully as the birthing process, education of insurance companies to advocate for their end-of-life clients and a reduction in the cost of pain medication.

"This project is just the beginning. We're just starting," Nasseri says of the Lawrence Caring Community Council and Russell's performance. "These kinds of projects for us are a means for us to achieve those kinds of goals."

Suzi Anderson hopes people will get the message.

"I just feel strongly that the word of Hospice needs to be spread," she says. "Everyone was so kind and compassionate."