More treats on the menu than tricks

Halloween activities for all ages abound in Lawrence area

Looking for something to break that Halloween monotony?

If so, Lawrence may have something to offer.

Many local businesses and organizations have come up with activities to delight and fright tricksters of any age.

If you have children to consider when making Halloween plans, the Lawrence Arts Center has an event for you. The All-Arts All-Saints Eve Family Fun Fest will offer events geared toward families with children aged kindergarten through sixth grade.

Among the amusements will be a haunted house complete with fog machines and mazes, a carnival with various prizes, a mad scientist laboratory, a fortunetelling booth and face painting.

Children also will have the opportunity to perform skits based on their costumes at the Scary Tales Theater.

This is the first year for the two-night event.

"In the past we had done Boo Fest," says Margaret Morris, education program director. "Last year we didn't do anything because of the building change, but we are really excited about this."

The festivities will be 5 p.m.-8 p.m. Thursday and Friday at the Lawrence Arts Center, 940 N.H. Tickets for each activity are 50 cents. Family packs of 10 tickets for $3 are also available.

If you're looking for some late-night family fun, check out Three Minutes or Less: A Short Attention Span Variety Show.

"We have a wide range of performers and acts, so there is something for everyone," says the show's creator, Robert Baker. 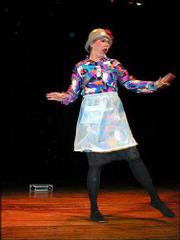 Janet Fitzgerald/Special to the Journal-World

A Hag performs during the January installment of the short-attention span variety show Three Minutes or Less. The next show falls on Halloween, 10 p.m. Friday at Liberty Hall, 642 Mass. A Hag Wanna Be Contest will precede the performance at 9:30 p.m.

Started by Baker in 1999, the show features a broad range of acts that last no longer than three minutes and a pre-show Hag Wanna Be Contest.

Among the 24 scheduled acts will be Spencer Lott's Squiggle Puppet and Balloonman. The show also will feature its first mixed media act: music video performed with live dance accompaniment.

Serving as hostesses for the event and performing two Halloween-related dances, will be the Hags, who will warm up the audience and pull performers off the stage when their three minutes are up.

Tickets to the event are $6 and are available in advance at the Liberty Hall Box Office. For more information, call 842-6572.

For the 21 and over crowd, the Eldridge Hotel, 701 Mass., offers the Haunted Hotel Costume Ball.

Live music will be provided by Chubby Smith and his Orchestra and Descarga KC. Chubby Smith will take the stage at 8 p.m., performing music from the band's 1950s style, punk-funk repertoire. Descarga will have the mic for the rest of the night, performing Latin music with Kansas City flavor.

There will be a cash bar and refreshments. There also will be a costume contest with categories ranging from most original to scariest. A $500 cash prize will be awarded to the best overall costume.

This is the first year the historic hotel has offered a night of Halloween-themed entertainment.

"It is our first year to try this," says Ginger Ray, office manager at the hotel. "Since Halloween fell on a Friday, we thought it would be a fun thing to do."

Admission to the ball is $25. The Eldridge is offering a special package deal for $149 that includes two tickets to the ball and a one-night stay at the hotel with a free breakfast at Shalor's.

For art enthusiasts searching for Halloween fun, the Grimshaw Gallery is planning a spooky art show.

With media ranging from audio to decaying matter, approximately 15 local artists will be showing their work and donning homemade costumes for the event.

"We have been working for about one month getting the show together," says Grimshaw artist Jay Gordon, whose costume will include live crickets. "We originally were inspired to do it about four months ago."

The night also will include music from two local DJs, Sapho and CMC. Wine will be served, and patrons are encouraged to wear their spookiest costume.

The apex of the evening will be a funeral procession that will begin at the gallery and continue down Massachusetts Street. Leading the way will be a steal coffin created by one of the artists.

The fun begins at 8 p.m. Friday at the Grimshaw Gallery, 731 N.H. The show is free and open to all ages.