Kooky is in style for Halloween

By By Ashley Powers - The Dallas Morning News

Dallas — Want a peek at the nation's psyche? Open your door on Halloween.

America is ready to let loose again, retailers say. In tough times, kooky is in.

The popularity of airy and fantastical costumes -- particularly for adults -- mirrors the nation's mood, say retailers and academics. Wearing something outlandish offers people who are weary of the rocky economy and the dreary news of war a mental break -- at least for a day.

"Some of my friends have survived layoff after layoff with families to support," says Sonia Martinez, 38. "With the economy being how it is, and everyone being stressed out, you can just let loose."

Martinez had already bought a sorceress costume -- a black, purple and gold rayon dress, high-waisted, with a tiara.

How do you think about troubles in a get-up like that?

Two years ago, it was nearly impossible for people to cloak themselves in traditional gear. Falling so close to Sept. 11, a Halloween outfitted in gore and fright seemed all too real. Fantasy didn't feel right, either.

Instead, little firefighters, soldiers and police officers trekked from door to door. "It was just so somber," says Chris Riddle, a trend-spotter for Cleveland-based American Greetings. "There was so much sadness." 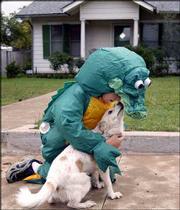 Parker Belcheff, dressed as an alligator, greets a stray dog as he goes door-to-door helping his sister, Megan, raise money for the Arlington Heights High School Prom. Not sure what you want to be for Halloween? Go as kooky as you wish -- originality is key.

But last week at Party City in Plano, none of the five Go USA costumes had sold out. One, Sailor Gal, was marked down from $29.99 to $15.

However, the store had no more Pirate Girls. Billy Flynn from Chicago and Neo and Trinity from the Matrix movies were gone. At $199.99, so were the fanged and three-fingered Bat Creature Reachers.

The message retailers are hearing: Let the party begin.

'Mood of the country'

Marilynn Wick, president of four Costume World stores, says getaway fever is pervasive in her dressing rooms, too. Pirates of the Caribbean outfits sail off racks, as does Britney Spears apparel.

Saddam Hussein and Osama bin Laden, however, are too much for shoppers. Customers even avoid harem costumes -- it's a reminder of the tumult in the Middle East.

"It is the mood of the country that determines how we celebrate this holiday," she says. "Halloween is a current-affairs experience."

At Party City, Plano homemaker Michelle McKool, 34, wheels a shopping cart stuffed with Halloween gadgets, such as the trick mirror that cackles. Her costume: a "scary old lady" with a wrinkly mask and a pillow to hunch her back.

"It's nice to get away for an evening and dress up and forget about things," she says. Well, most things.

Her 7-year-old son, Zachary, throws a toy stun gun into her cart: "It goes with my costume!" he says.

Zach's going as an "Army guy." He sees them all the time on TV.