Review: Grabbed by the Ghoulies - Xbox

A creative effort maligned by a nagging sense of lather, rinse and repeat.

Grabbed by the Ghoulies marks the beginning of Rare's commitment to the Xbox. Last time we saw a Rare game was the mildly praised Star Fox Adventures on the Gamecube. Much has been said of the company's loss of key players in the wildly acclaimed Conker's Bad Fur Day and Banjo-Kazooie...but does Rare still have that platforming magic? 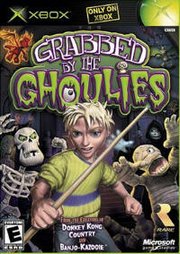 The quick answer is no, but it's not that easy. GBTG is really fun. The problem is that the sum of its parts don't amount to much.

You're a kid out to save his girlfriend from the clutches of tons of ghouls and ghosts in a mansion. Instead of pressing buttons to punch and kick, you use the right analog stick as your attacks. Move back with the left analog control while attacking forward with the right analog stick. It's an innovative gameplay element that really works well in this exercise.

In certain rooms you have certain tasks to complete before the door is unlocked. Defeat all enemies, find the key, etc. These are all really simple to do and the problem comes when levels abruptly end and the mini exercises don't seem to be relevant at all. This comes to a head when you get "scared."

Periodically you have no choice but to get scared by a scripted event. In order to recover you must press buttons in a certain order that appear on the screen. The game gives you ample time to press them, resulting in an expendable experience.

You can pick up many items and destroy a lot of set pieces that make up for a lot of random fun, but, again, it's all just doesn't come together as a whole. This adds to the feeling of monotony.

The presentation is awesome. Characters mumble while subtitles explain in a comic book-esque framing likened to a 1920's silent movie. It's highly enjoyable. The graphics are nice and stylistic without being loud. The audio is hilarious and also does its part.

The game is creative, but not worthy of the Rare pedigree. As you progress, nothing really changes. It's more of the same. Again and again. And back once more.