"I thought I was just coming here to present an award," he said. "I get to take one home."

Other top awardees at Monday's show were Tom Petty and the Heartbreakers, who received the Legend Award.

Stevie Nicks presented the award to the group in front of thousands of cheering fans at the Aladdin hotel-casino on the Las Vegas Strip.

The group performed two songs, "I'm Crying" and "Runnin' Down a Dream." Petty thanked radio stations for taking a chance on an "unknown band."

Beyonce opened the show with her sultry single, "Baby Boy," which the diva belted out surrounded by a ring of fire. 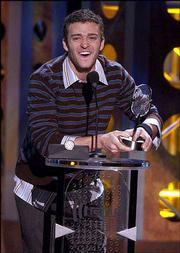 Justin Timberlake accepts an award for Top 40 Radio during the Radio Music Awards at the Aladdin Hotel in Las Vegas. Monday's awards were based on the top-played radio hits.

Tim McGraw was named Artist of the Year in the country category.

"Thank you for your love, your support, all that you've done," Jackson said.

The nominees in each category were based on radio's top-playing songs. Radio program and music directors nationwide voted on the winners.