By By Mike Corn - The Hays Daily News

Victoria — Pumpkins are good for plenty of things: Baking, carving or decorating.

They're also great for throwing, as in catapulting from whatever contraption might be devised for just that task.

That's why Tim Schmidtberger buys his pumpkins based on dimension, rather than the number of pounds. He then puts them right in the freezer.

The next morning, they're ready for shooting out of a 20-foot, air-powered cannon. Air pressure from this "cannon" amounts to hundreds of pounds per square inch.

It's called "punkin chunkin." There's even an association by that name, and there's been a national contest for 18 years.

It's all in fun. And it's quite a sight -- a converted anhydrous ammonia tank with a 10-inch-diameter, 20-foot-long piece of pipe attached to it.

The cannon is hooked up to Schmidtberger's Ford pickup, which rocks violently when a pumpkin or a bowling ball or a frozen gallon milk jug is shot from the barrel.

Pumpkins might be the ideal ammunition for the cannon, but they are good for only one shot, Schmidtberger joked. Milk jugs are readily available, although Schmidtberger said he will have to drink a lot of milk to replenish his supply.

Bowling balls can be used over and over, provided they don't hit rocks or other hard objects. They offer a distinctive whistling sound, apparently the result of wind passing through the finger holes. 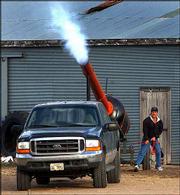 Tim Schmidtberger test-fires his pumpkin cannon near Victoria. Schmidtberger built the 20-foot air-powered cannon from an old anhydrous ammonia tank, some pipe and a valve. He plans to launch pumpkins at a "punkin chunkin" event Thursday near Hays.

Either way, it's quite a sight. First comes a "whoosh" that accompanies the release of air, followed by the object flying hundreds of feet.

The mega-pumpkin gun -- like the more widely known potato guns -- is an outgrowth of a gathering each year in Rexford sponsored by the Teens for Christ organization.

The gun, the brainchild of Schmidtberger, with the nudging of Ken Massey, will make its public debut at 3:30 p.m. Thursday at the Celebration Community Church, just northwest of Hays.

There, at least three pumpkin tossing machines will be on hand, Massey said. The three will come from youth groups at local churches, but other observers likely will be on hand for the event.

"This is the first time we've done this in Hays," he said, adding that about 300 people turn out for the Rexford event.

Schmidtberger's tosser is sure to wow the crowd. It can toss a pumpkin a quarter of a mile.

"This is like your first Lego set," Schmidtberger said, chuckling as he said only seven bolts needed to be removed to dismount the gun.

The pumpkin catapults that appear in Rexford often are elaborate pieces of equipment. Massey said the kids get into the task of building the machine.

For his cannon, Schmidtberger pulled an anhydrous ammonia tank from an old implement and used pipes and valves that he had on hand.

He had to buy a 10-inch valve, the type that can be quickly opened by pulling down on a piece of steel tubing.

The welding was done by Steel Fabrications in Hays to ensure the safety of the children who would be around the cannon.

"The pumpkins fit so much tighter," he said. "They really get cooking."

Schmidtberger said he's had fun with the cannon and so have the kids that have surrounded it. People laugh when they see it, he said, and then ask if he can shoot it.