Rage against the machine

"What you are about to see is beyond your worst nightmares," narrates a voice coming from a small TV outside on a table at Eighth and Massachusetts streets.

Unsuspecting shoppers and diners stroll by as Friday night falls -- dozens of them stop dead in their tracks, arrested by gory images of a still-breathing cow, throat slit, blood gushing from the wound. The camera zooms in on the cow's mouth as its lips slowly stop quivering.

It's not a Halloween horror flick. It's "Meet Your Meat," a documentary that follows the meat many ate for dinner from the farm to their plate. And then some.

"For animals raised on modern intensive production farms and killed in slaughterhouses, it is cold, inescapable reality. Once you see for yourself the routine cruelty involved in raising animals for food, you'll understand why millions of compassionate people have decided to leave meat off their plates...for good."

Thus goes the reasoning of animal rights groups -- like PETA (People for the Ethical Treatment of Animals) and Lawrence's AOK (Animal Outreach of Kansas) -- for showing such gut-churning images in public.

As Baldwin's voice continues, the sequence of horrific video clips does not relent.

On a vast warehouse floor, a sea of chickens parts as a man clubs stragglers with a hammer. They're then lobbed into bins by the handful. Squealing pigs emerge on a conveyor belt from a scalding bath, writhing in pain. Otherwise cute-faced cows have their horns clipped off with bolt-cutters while conscious, spraying blood from the wounds like water guns. A dairy cow's lesions fester with pus and flies. Another diseased, half-dead cow is dragged into a truck on its side as Baldwin tells viewers such animals are routinely processed as Grade A beef.

"The idea is to catch their eye," said Judy Carman, whose group AOK has set up the booth on Mass. Street many Friday evenings for the last two years. 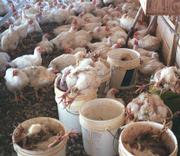 "Maybe it will plant a seed," Carman said of the video, which is available online at lawrence.com. "Much worse things happen every minute of every day. We believe that most people have good hearts, and if they knew what was going on, they would choose to stop eating meat or get meat from family farms where the animals were not confined and not tortured."

"Basically what we're trying to do is show the truth," she said. "Images have a much bigger impact than words. People don't think of a hamburger as a cow being strung up by their legs, bled while they're still alive. Or having their legs cut off or skinned alive. That what's happening. The truth is being hidden from people. Like Paul McCartney said, if slaughterhouses had glass walls, everyone would be a vegetarian. That's what we're trying to do is put glass walls on the slaughterhouses."

Social Darwinism
Of course many people see the images without ever considering giving up meat. Some have no problem eating a fat burger with the PETA videos fresh in their mind. 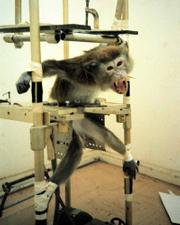 A picture from the Silver Spring monkeys case, PETA's first investigation. The monkeys were placed in such restraining devices and their reactions to noxious stimuli (flames from cigarette lighters, surgical pliers that pinched their skin, etc.) were monitored. PETA first uncovered the abuse of animals in experiments in 1981, launching the precedent-setting monkeys case. This resulted in the first arrest and conviction of an animal experimenter in the United States on charges of cruelty to animals, the first confiscation of abused laboratory animals, and the first U.S. Supreme Court victory for animals in laboratories.

"I've been around that sort of stuff, and it doesn't really affect me I guess," said Weatherford. "I remember when I was a kid, my dad would come home from hunting trips and cut off the pheasant's feet and we'd pull on the tendons to make the claws close. That was always fun, so I don't think I was ever put off by it."

Weatherford also grew up around one link in the beef industry chain. His dad raises some 150 head of cattle a year on a 320-acre farm west of Clinton Lake. His Hereford/Angus mix steers are raised for five to six months and then sold at auctions houses. Though his family's involvement with the cattle stops short of slaughterhouses, he's well aware of what's going on.

"Slaughterhouses are going to be gross. Obviously," said Weatherford, adding that he doesn't eat veal because producing it involves unnecessary cruelty. "But I'm too much of a social Darwinist to really care. I think there is a difference between humans and animals. We do have canine teeth for a reason. Slaughterhouses are how you feed people. Would it be any different if people had cows in their back yard (for meat)? It's just different because people don't want to see it. People want their meat but they don't want to be confronted with it."

Beaucoup beef
Indeed beef is in higher demand than it has been in 10 years, in part thanks to the no-carb high-protein Atkins diet, a much hyped way to lose weight by eating less breads and pasta and eating more meat instead. 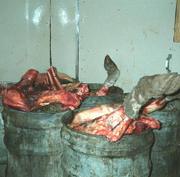 In 2002, the average American spent more than $400 on meat products. A sizable chunk of that goes directly into the pockets of Kansans. More than 20,000 Kansans work in the production and processing of meat, and the state ranks second in the United States for live animal and meat exports, valued at $748 million in 2002.

The industry pocket book is where Carman and the 20 active members of AOK hope to win their fight for stricter animal rights laws. Though a May Gallup poll indicated 62 percent of Americans support passing such laws, only about 4 percent of the population is vegetarian. Carman said several AOK volunteers spend 20 hours a week trying to marshal support for industry reform and get people to buy fewer meat products, if not boycott them altogether.

Ironically, the meat industry is also interested in the "humane handling" of animals, according to the American Meat Institute, including for economic reasons. A report by the instute says that "stressed" animals produce lower-quality meat, which can result in economic loss. "Animals that are calm and well-handled typically will move through the chutes more easily, which enables the process to operate efficiently," reads an AMI fact sheet.

Not all of AOK's work involves shocking people into awareness. The group also travels around the state, passing out leaflets to crowds at circuses or rodeos, documenting events like a rural "Chicken Fly" where the flightless birds are dropped from ladders as a fundraiser, or trapping feral cats on campus at KU. Last year, a couple dozen volunteers held a service outside IBP processing plant in Emporia "in memory of the 3,500 cows killed by IBP daily," as a sign read.

Carman concedes that protesters run the risk of being dismissed or even ridiculed by staging bizarre events. "It's hard to know how much impact you're having," Carman said. "But it's like Ghandi said: It's all an experiment in truth. We're constantly trying to think of new ways to get the truth out in ways that will attract enough attention that people might think about it. You know, people have funerals for their dogs, why not for a cow. It's pushing the envelope out a little bit farther than people are used to thinking."

To that end Carman also wrote a book titled "Peace to All Beings: Veggie Soup for the Chicken's Soul," published by Lantern Books. (The paperback is available used on Amazon.com for $10 and new at the Community Mercantile) The book attempts to reach people through their religious beliefs by connecting humans' collective spiritual peace with eliminating violence to the environment, to other humans, and to animals.

"The book articulates the vision we share for a peaceful world," Carman said. "It's hard to keep that vision ... we're living in a world-view that human beings have the right to exploit animals -- and other people and the environment, too. We're moving toward another paradigm that we should respect all beings including animals ... but it's going to take a long, long time." 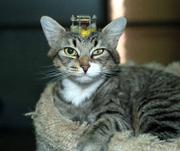