EA Sports Big returns to the slopes with an avalanche of new options that amounts to a nice update to the SSX series. 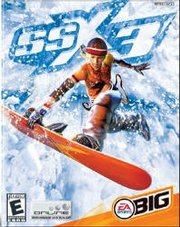 At first SSX 3 feels too much like SSX Tricky. Skating to the Lodge to customize your character or to the race line to start a race seems like a gimmicky way to get around simply selecting the mode at a start screen. Peak 1 is your starting point with tracks that don't really branch into freedom as the hype promised. You earn medals and points for your mad tricks and speed to build attributes and buy new clothes, customizing your character. Everything feels very familiar and almost disappointing. Sure there are new Uber and now Super Uber tricks, but that sort of upgrade is to be expected in a sequel so highly touted on over-the-top trickery.

Then you unlock Peak 2, and the hype all starts to finally make some sense.

Snow drifts and mini avalanches start chasing you. The jumps get bigger, the slopes get wider and much more free-roaming. The snow starts coming down harder and it's almost as if the air you breathe gets thinner.

If there is one thing EA Big did right in this sequel it is the atmosphere and illusion of urgency getting down the slope. You start to master the handstand and the leaning move to link combos and you unlock Peak 3 which is a true experience to behold.

You earn the newness. You earn the feeling of a true sequel. It's not obvious at first, and painfully so. But the journey is worth it. Don't like techno music? Turn "ambience" on and prepare to be surrounded by the THX certified nuances of the slopes.

However, landing tricks is so much easier than in SSX Tricky. It's so forgiving, in fact, that it takes away from the feeling of reward for landing a truly complicated trick. In Tricky, you had to align your snowboard to the gradient of the slope to land it well. In SSX 3, it auto-adjusts most of your landings. Boo. If it wasn't for the anticipation of Peak 3, I would've stopped playing because of the lack of trick-landing challenge.

The graphics are wonderful, doing a better job this time around with a solid frame rate, recreating an expansive mountain with much more detail. The ambient sound effects are awesome in surround and are THX certified, no doubt.

Lots of unlockables and you can go online with the PS2 version. The Gamecube and Xbox versions do look slightly sharper, though.

When all is said and done, SSX 3 is a worthy successor to its brothers, taking a step forward in scope but holding the player's hand too much when landing 2160s.