By By Beth Lawton

For people like Gil Bavel, listening to ghost stories is a year-round event.

From the Eldridge Hotel and other haunted locales, the Lawrence author is collecting reports of ghost sightings for a book years in the making.

"It's something I do 365 days a year, but a lot of other people only focus on it at this time of year," Bavel said, working from a cluttered home office in north Lawrence.

Bavel started interviewing people "in earnest" three years ago -- the evidence sits in folders in a milk crate on the floor of his living room, and in documents on his computer. But the idea for the book came to him 11 years ago, springing from a lifelong interest in supernatural activity.

"When I was young -- as soon as I could read -- my mother would take me to the Lawrence library. I used to check out books on the supernatural," he said.

The bookshelf in Bavel's office holds books about UFOs, Big Foot and ghosts, as well as dozens of science-fiction books.

His own book, "Kansas Ghosts: The Dead Walk in Kansas" will be published in Fall 2004. It is Bavel's first non-fiction effort. He has been published as a poet and science-fiction writer.

But now Bavel is working with about one dozen researchers tracking down ghost stories in Kansas, Colorado, Nebraska, Oklahoma and Missouri from people who say they have seen ghosts.

"A lot of stuff I'm getting is things that have happened in places that aren't legendary," Bavel said.

He is looking into the apparition of a woman in 1800s garb, he said, who appears near the corner of 8th and Massachusetts streets.

Bavel said he would mention the tales about Stull Church in Stull, which was torn down last year, but he does not believe those rumors are true. 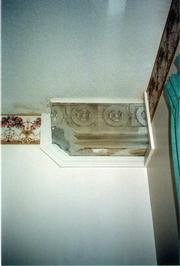 The original cornerstone of the Eldridge Hotel, at 7th and Massachusetts streets, is now in room 506. Housekeeping staffmembers have told Bavel they saw ghosts in that room.

"Generally, graveyards are not where you find ghosts," Bavel said.

Ghosts more often appear at the place the person was killed and generally haunt places, not people, he said.

"The commonly held reason for them existing is a particularly violent or unexpected death," Bavel said.

But there are plenty of skeptics out there who, unlike Bavel, say ghosts do not exist.

University of Kansas Psychology professor David Holmes said "I can tell you that it probably falls in the same category as people who see aliens from outer space. These are people who are extraordinarily susceptible to suggestions."

But Bavel, a believer himself, is undeterred.

In addition to little-known Kansas ghost stories, Bavel is researching the more well-known tale of room 506 in the Eldridge Hotel. Bavel said he believes the ghost activity centers on the original cornerstone of the hotel, which is now in room 506.

When Bavel and photographer Alison Dishinger went to that hotel, he said all three of Dishinger's cameras stopped working near the elevator on the fifth floor. Failed cameras and other electronics can happen near paranormal activity and people who buy expensive electronic gadgets to detect ghosts may be wasting money, he said.

"It would be a lot easier to bring a sensitive or someone who can read auras."

Some other ghost stories have not come so easily, and sometimes people who may have seen ghosts are not interested in talking to him or his researchers.

"The more west you go in Kansas, the more religious people seem to be," Bavel said. "People tend to clamp up."

Bavel already has a sequel in mind and plans to start a book on UFOs when the Kansas Ghosts sequel is complete.

The first book, he said, may give some encouragement to people who are reluctant to speak with him now.

Hans Holzer, an author and ghost-hunter Bavel admires, agreed to write the introduction to "Kansas Ghosts."

"It's a real feather in my cap," Bavel said, of Holzer's introduction. "I was thrilled."

But Bavel still has a long way to go to complete the first book. He is still looking for researchers in Kansas City and the states that border Kansas. He has yet to complete research in Russell and Topeka, and at Haskell Indian Nations University and KU.

Bavel's book is not the first about ghosts in Kansas. KU graduate Lisa Hefner Heitz, of Topeka, wrote "Haunted Kansas," published in 1997. Heitz is working on her sequel. The Fort Riley Historical and Archaeological Society published "Ghosts of Fort Riley Past and Present" in 1998.

"Right now there's a lot of enthusiasm about ghosts, but that kind of goes with a lot of other trends, like hemlines," Bavel said.