Even in 3D it's worthy of the Castlevania name...but how worthy?

Konami originally designed Lament of Innocence (LOI) to be a 2D game patterned after the massively popular Symphony of the Night. Sony wouldn't let them and forced the series into the 3D realm once more after an abysmal 3D offering in Castlevania 64 for the Nintendo 64. 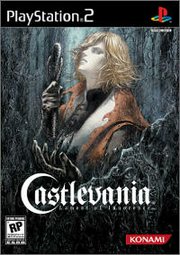 Even though 2D scrollers are on the rise led by the wonderful Viewtiful Joe, this new Castlevania installment loyally recreates the series in three dimensions.

For those two gamers in the world unfamiliar with the Castlevania series, the main character is always some sort of vampire hunter usually related in some form to the Belmont family. You fight a wide array of ghoulies, demons, heavily armored knights and other apparitions to an inevitable boss figure who has patterns and subroutines to memorize so you can learn to counter those with your weapons. LOI is no different and really dazzles the senses with the various amounts of enemies.

You are Leon Belmont starring in this prequel to all Castlevania games. Your betrothed Sara was kidnapped by an uber-vampire and you need to go save her from its clutches. You have this old man Rinaldo helping you along the way. And luckily he owns a shop right by the castle in the middle of nowhere so you can always power-up. It's amazing that Rinaldo doesn't get a citation for illegal commerce.

There is a main hub in the castle with a training area, save station and five transports taking you to the five main areas or stages in the castle. The design is purely lazy as it doesn't make the castle seem like a cohesive whole. What does make it seem like one castle, unfortunately, is the extremely repetitive level design. You will usually have some backtracking to do and the numerous long corridors of nothing really bore you to death.

There are some platforming elements to be had, whipping yourself up to a ledge or so to avoid certain death, but these instances are minimal. Also there is a lot of "get this to open this to go here" like other Castlevania games, but is surprisingly so drawn out between stages that it seems like a chore more than it does fun.

In LOI you have one whip that lasts you through most of the game until right before the last stage. This is truly disconcerting considering the amount of weapons you could acquire in other Castlevania games like Aria of Sorrow and Symphony of the Night. You can find a few other whips, but they aren't very accesible or necessary.

There are also ten relics to find and collect throughout the game which give you a magic power. You gain magic power by blocking enemies' magic attacks. Blocking is a new element highly welcome, even though in this edition it makes the game way too easy.

In your training area in the main hub of the castle you acquire your first relic. Most likely it will be the only one you collect before beating the game. That's right. There is no incentive to search for these incredibly "well" hidden magic relics as you can complete the game without using magic.

Also, there are no experience points to be had by beating many enemies, so you'll find yourself just running by many enemies to get to the next door. There are various trinkets you can find or buy at Rinaldo's shop that increase your defense and offense by certain percentages, but, again, the game is too short and too easy to care.

The final main gripe is the camera. It generally does a good job in most rooms but when having to platform jump, the camera usually settles in a diagonal position, creating depth perception problems. What's worse? The boss battles are absolutely infuriating. The camera loves to settle behind the boss many times, making you unseen for reference. This is when you will get hit the most since all of the bosses aren't very tough...when you can see yourself. So basically you have to move around blindly until the camera decides to show you again. The camera is the only thing making this game hard.

No, really, there are good points

Your sub weapons are a cross, knife, crystal, holy water and axe. The twist is that there are seven different orbs to collect by beating bosses. Equipping an orb changes the behavior of your sub weapon, increasing the amount of sub-weapons to 35. Using these weapons consumes hearts. The more powerful versions take more hearts. These variations are beautifully designed.

Despite the mundane, repeating corridors, the graphics perfectly create the musty and gothic, if you will, atmosphere known specifically to a Castlevania game. The enemy design is superb and numerous, making the battles you don't run away from very interesting. The whole look of the game is particularly engrossing from the get-go bringing you in further with the fluid animations.

Leon controls like a dream. The analog sticks respond tightly and nothing feels sluggish. You learn different techniques and combos with your whip as you progress. The list is rather extensive and very satisfying when you learn to master the bigger combos.

The original music is truly haunting and phenomenal adding to the atmosphere. Despite the gameplay shortcomings, Konami did everything right in the graphics and sound department to faithfully reproduce the atmosphere in the 3D realm.

Castlevania: Lament of Innocence seems like a stellar achievement at first, but deeper into the game the shortcomings come alive. This results in a great adventure game, but just a good Castlevania game.

Editor's note: We've replaced the "Replay" grade with both "First Play" and "Last Play" to better break down the grades. First Play is the initial reaction about an hour into the game. Last play is how the game fared by the end, with replay value added in. For instance, Halo would've received a B for first play since it seemed like a normal FPS at first but then an A at last play since the game is so deep and engaging by the end. Regardless, the overall score is NEVER an average as each category is weighted differently.