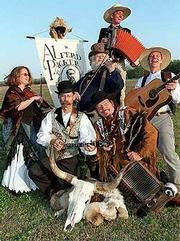 The Packer name may be synonymous with survival.

From the flesh-eating resourcefulness of 19th-century cannibal Alferd Packer to the fourth-quarter comebacks of Brett Favre's football squad, Packers have a way of thriving in the most adverse of conditions.

Such is the case with Lawrence's Alferd Packer Memorial String Band, an old-time folk outfit with a flair for the outlandish. Since its inception in 1978 as a group of friends who spent Saturday nights jamming at Johnny's Tavern, the Packer clan has seen nearly 25 members come and go. Its only remaining original member, Jim Brothers, doesn't even play an instrument that could pick out a melody (Brothers specializes in juice harp, washboard, whistles and guns).

"We like to claim that we've been decomposing music for 25 years," Brothers says. "When you name yourself after a cannibal, you can't take yourself too seriously."

The most recent incarnation of the Packer band -- Brothers, Steve Mason, Steve Goeke, Matt Kirby, Mike Yoder and Lauralyn Bodle (all of the members play multiple instruments) -- will celebrate its 25th anniversary with a performance at the Lawrence Arts Center that will double as the band's first new recording since 1989. Though Brothers admits the band has mellowed out a bit in recent years, fans can still expect many of the Spike Jones-inspired shenanigans that earned the Packer band its reputation as the most unpredictable string band in Kansas.

"When we first started, it was bizarre because there wasn't that big of a folk movement at all and here we were marching onstage, flying the flags, shooting guns and throwing a stuffed goose into the audience," Brothers says.

"We were about as country as Metallica."

Honing their craft
In many ways, the group member's onstage antics are extensions of their creative personalities. Brothers and Kirby are self-employed sculptors, while Goeke and Mason double as old-fashioned luthiers (Goeke makes banjos and Mason repairs acoustic instruments).

"For most of us, (the band) is an anachronism that we're consciously partaking of to satisfy a kind of visceral and intellectual urge to do something creative and expressive," Kirby says. "We're kind of in the tradition of funny characters, like the guy that builds the weird mailbox and puts it out in front of his house ... except we're in a band."

That the Packer band still exists speaks to the resilience and dedication of Brothers and Mason, who at one time suffered through a "hell tour" that provoked all the other band members to quit.

"We got together and realized that the Alferd Packer Memorial String Band is exactly right for us, for the musicians that we are, for the type of interaction that we want with an audience," Mason says. "From that point, we just replaced everybody with like-minded people."

The Packer band has benefited from its association with the Kansas Arts Commission, which pays 40 percent of the cost to hire the group (the bands' fee ranges from $2,400 to $3,500). Thanks in part to the Commissions' support, the group has performed in 119 Kansas towns.

Taxmen
Locally, the Packer band is best known for its annual tax-day performance at the downtown post office (which has been written about in The Wall Street Journal and Reader's Digest). The band showed up unannounced in 1988 and has returned each year since.

"We fully expected that they were going to throw us out," Mason says. "The postmaster loved us and invited us back. Now we got a new postmaster; we just got to break a new one in."

In recent years, however, the specter of electronic filing has challenged the tradition's viability.

"When we first started doing it, there would be maybe 30 or 40 people coming in in the last five minutes to get their taxes filed before midnight," Mason says. "Last year, it was probably five or six."

Last year, the band members finally got paid for their efforts: a book of stamps each.

"We figured it worked out to about fifteen cents a gig," Brothers says.

The band also has performed at a number of Burcham Park Fourth of July festivals and frequently participates in the popular West Side Folk series. Though the group started playing in bars, it rarely ventures into smoke-and-booze territory anymore.

"We like a sober, sitting-there audience, because we do a lot of funny songs, and they have to be able to pay attention through the setup to the punch lines," Mason says.

"We're kind of like the old-time Village People," Mason says. "When I started with the band, Jim wore Civil War outfits all the time; that was just the way he dressed. I just put together a costume so I could be like Jim, and it kind of grew from there."

The group performs a mix of original material and cover tunes, favoring old-time Americana and traditional bluegrass numbers like "Sitting On Top of the World." The band has at least three songs dedicated to its namesake, a real-life gold-prospecting tour guide who killed all the members of his troop when they became stranded in winter snowfalls.

One song, titled "Guilty," explores the question of whether Packer killed the members of his troop in cold blood or self-defense. The song tells the story of a team of archaeologists who returned to the site: "They found a heel bone connected to an ankle bone / They found a jaw bone connected to a skull bone / They found bones and bones on top of bones and bones / Those bones told the story of how they got it in the end."

Brothers acts as the groups' resident gun expert. Though he now favors blank cartridges, Brothers used to pack the guns with black powder and cornmeal (which makes for a bigger flame).

"We made sure you had two packs of cigarettes worth of smoke before you left our concert years ago," he says.

One of the group's most vivid memories recalls a time when Brothers accidentally shot a hole in a cotton-padded chair during a performance in Springfield, Mo.

"I'd beat a few licks and then beat out the fire," Brothers recalls. "The audience thought it was wonderful."

Aging with grace
In recent performances, the group has veered away from over-the-top gun jokes out of respect for the events of Sept. 11.

"The guns are suddenly not as funny as they used to be," Mason says. "I think we're as funny as we ever were, but we're more cerebral. The jokes are a little higher."

The band also has trimmed down its schedule from three or more shows a month to about one.

"The young bands are probably playing as much as we used to, but they're not getting paid anywhere near as much as we did," Mason says. "I think, frankly, people are staying home watching TV now."

In the Packer tradition of trickery, the 25th anniversary comes with a bit of a caveat.

"The nice thing about doing this is we formed loosely 25 years ago and formed formally 24 years ago," he says.

"Next year we can have the same party."