Candy is king for trick-or-treating

Sandy Praeger knows what to have ready tonight when trick-or-treaters arrive at her doorstep.

"I usually give them what they want -- candy," said Praeger, state insurance commissioner, who lives in west Lawrence. 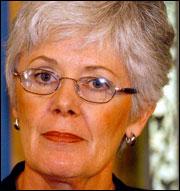 "This is a holiday and this is not a time to impose healthful eating," she said.

Praeger and other well-known Lawrence residents were asked earlier this week what they're handing out to the horde of hobgoblins that will hit city streets at dusk. Most said they were ready.

For example, Praeger plans to have an ample supply of miniature Snickers.

"I just make sure anything I pass out is individually wrapped so parents don't have to worry," she said. "Years ago, when my kids were younger, we used to do popcorn balls. But parents don't like that anymore."

Lawrence Mayor David Dunfield hadn't made any treat purchases when contacted earlier this week. But Dunfield said he planned to carry on a family tradition.

"We usually hand out candy in one sort or another," he said.

If you run across City Manager Mike Wildgen on Halloween night, he'll be wearing a propeller beanie.

Wildgen won't be home -- he's propping over to a party.

But he did think about what he might prepare if he were to stay home.

"I threatened to make cookies, but that might be a real scare, once they ate them," he said, chuckling.

Lawrence's fire chief, Jim McSwain, was expecting between 20 to 30 trick-or-treaters to come to his door.

"My wife's got a combination platter of candy. There's Reeses peanut cups, there's Milky Way and stuff like that," McSwain said. "I don't know. I try not to look at it because I don't need it."

One rural Lawrence resident, U.S. Rep. Jim Ryun, R-Kan., will be spending his Halloween in Washington, D.C., with his wife, Anne.

"The harvest season is one of my favorite times of the year. It is the time when God gives back to us the rewards of our toil," Ryun said. "This year Anne and I will be giving young trick-or-treaters some of what the harvest has given us -- Granny Smith Green Apples."

Another elected official, Kansas Attorney General Phill Kline, also plans to get into the spirit of Halloween. 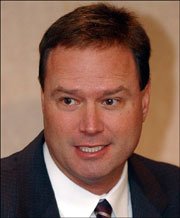 "He and Deborah (his wife) are handing mini chocolate bars at their Topeka home," said Chad Bettes, a spokesman for Kline.

Kansas University basketball fans might be interested to know that new head coach Bill Self has already picked his starting five -- and there's not a Butterfinger in the bunch.

Self's treat basket will be a slam dunk for those who like sweet stuff.

"The reason he knows that is because he's tried them all," said Joanie Stephens, his administrative aide.

The Manginos are leaving their son, Tommy, at home to call the signals for Halloween treats. 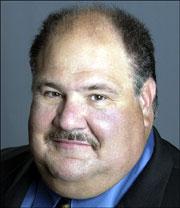 But the Manginos did get in on some of the spirited fun -- Mary Jane Mangino handed out cookies and juice to the team after Thursday's practice for a pre-Halloween treat.

Chuck Woodling, J-W sports editor, will also be on the road to College Station, to cover Saturday's game.

But Woodling has concocted a plan for any trick-or-treaters he might get tonight.

"If someone knocks on my motel room door, I'll give them a dollar so they can go to the candy machine," he said.

But her candy plans were already made.

"Snickers, PayDay, Hershey bars and Jolly Ranchers," she said. "There's a really good chance that I'll eat it all before the trick-or-treaters get there."

"This is my first time as a homeowner. I'm looking forward to a lot of trick-or-treaters," Reid said."I have miniature Twix bars and Kit Kats, the full sized Reeses's peanut butter cups and little bags of peanut M&Ms."

"I won't be handing out toothbrushes," she said. "Remember when you were little kids and those people always handed out things like dental floss?"

Not everyone goes for the sweet tooth. One local celebrity is going with something a little different.

VonHolten, plans to have a variety of the noodles available.