The aptly named kill.switch was destined to get lost in the holiday mix being passed up on its lack of name recognition and promotion. Surprisingly, I am here to tell you it's a great action game that is totally worth a look this year. 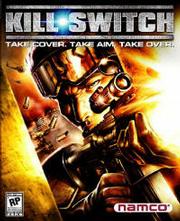 Switch is an all out, one man vs. the world action shooter from the third person perspective, but the controls are as tight and responsive as Halo. If you block the character model out, it feels like a solid first-person shooter. It also bears a striking resemblance to Freedom Fighters without a squad, but is much more fun to play.

Your main character is a mysterious cyborg with an AI construct constantly communicating with him. Your health will eventually refill if not taking damage. Sound familiar? You embark on six missions with two to three stages in each with tons of impressive weapons and a set of linear objectives that complement the guns-blazing warfare.

The twist to this game is how important it is to take cover. A few shots will kill you instantly so stages are designed with a plethora of set pieces to duck behind or lean from. What's cooler is blind fire. If there are too many bullets whizzing your way that it would prove too dangerous to lean out and aim, you can just press the fire button while ducking or with your back against the wall, and your character will stick the gun out randomly and fire, making the enemies take cover. The enemies also use blind fire, bringing an exciting new element to the table.

The enemy AI is phenomenal, if you don't play on easy. If you are seen, the enemy will never forget where you are and will keep shooting in your direction. If his cronies are around, rest assured he'll tell them to get on your tail as well. This is the first action game to remind me of the high level of AI in Halo, although it doesn't eclipse it.

Unfortunately, kill.switch is very, very short. The story is great but could've been longer, too. The AI on the harder difficulty provides some replay value, but it is truly disappointing how quickly it ends.

Also troublesome is the camera in close quarters. For the most part it's fine but if your back is to the wall and you want to view what is straight ahead, the camera will be so close that your character is taking up most of the screen.

The graphics impress on some stages, but are fairly barren on others. Character models are nice and both versions support 16:9. The sound is also a nice pillar of glory that will rock your surround systems.

kill.switch is one of the rarities that will pass most by. But trust me when I say that it should not be missed.