Not the best Tom Clancy game, but it's up there

Tom Clancy's Rainbow Six series has a great following on the PC and Xbox owners rejoiced knowing they would soon taste the squad-based tactical action on their beloved console. It was known beforehand that it would focus more on the action than its PC brethren. That it does, and delivers a good ride. 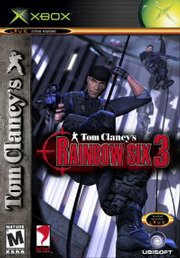 You are Ding Chavez, part of a Rainbow squad whose purpose is to be inserted into highly volatile situations where the first allied effort has gone wrong. You can command your squad to open doors, secure hostages or terrorists, diffuse, breach, frag, flash and combinations of the commands. You also can command them not to execute their order until you "say" zulu by pressing the white button. All of this can be commanded via the Xbox communicator headset or with intuitive controls via the A action button.

The game is pretty difficult and there is no way you are going to get far with Kamikaze Doom or Unreal Tournament tactics. If that is what you're looking for, this game should not be on your radar. If you like Splinter Cell and wonder how it would be from a first person perspective with a squad at your command, this game is for you. It errs on the side of realism; it only takes a couple shots to kill someone and also for you to be killed.

There are a variety of well-modeled weapons you can choose from at the beginning of each mission, tailoring your arsenal to the type of mission. However you can only carry two weapons and two grenade types with you, so you must choose accordingly. Also equipped are the heat and night visors that don't come into play as much as they should but provide for a better stealth experience.

The biggest and most notable fault is that the aiming controls overcompensate when making detailed shots. It doesn't bode well for the console at all. The analog sensitivity on the Xbox controller is there so you can control the speed at which you move the aiming cursor. But here in RS3, sniping can be difficult since the analog sensitivity is slowed down even more when you initially aim. You lose a valuable second trying to adjust to the unnecessary buffer. This detracts from an overall good experience.

Although many of the missions are really intense, there are some interspersed hostage extraction missions that are just plain dull and would be completely boring if it weren't for some impressive set pieces along the way to spice up the presentation.

The graphics are great and use the shadowing and lighting engine known to Splinter Cell. However, it still doesn't achieve that gloss we came to love in Splinter Cell. The 5.1 Dolby Digital surround is phenomenal and the separation between channels couldn't have been done better. The soundtrack is very movie-esque orchestra likened to a Tom Clancy movie. The A/V experience is overall engrossing.

The Xbox Live options may prove Rainbow Six's staying power, since there is no four-player split-screen which is an absolutely maddening trend and ploy by Microsoft to get people to play online. System link may be your best option since there are many lag issues even with a solid high speed connection. Your multiplayer games are your standard fare.

The end result doesn't match the anticipation but still rings true as one of the Xbox's better shooters.