It's official- Microsoft is now the undisputed leader in tennis video games.

Being a tennis player, I've always enjoyed the gameplay from Sega's Virtua Tennis series and even had fun with Mario Tennis. The other tennis games out there always controlled like a nightmare. 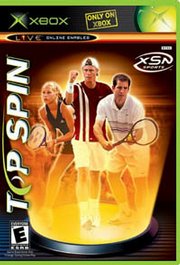 Knowing Microsoft's so-so record for killer sports start-up titles, I was weary of Top Spin. But from the first serve and volley, I was sold. Top Spin tennis is the best tennis game ever created, period.

Developer Power & Magic doesn't make any apologies for the amount of inspiration they took from Virtua Tennis. Why should they, anyway? It was the best tennis game until now. Power & Magic took the VT model and made it bloom, giving separate buttons for different shots. You have a button for flat hit, top spin, slice and lob.

The most impressive additions to the gameplay are the left and right triggers. The right trigger is a risk shot. As you press it a meter goes up and down. If you get it on or right near the center, you will unload a very powerful shot that is much harder to return. The drawback to using it is that if you don't get the meter to the center, you'll hit the ball into the net or way out of bounds. This adds several layers of depth to the tennis game and really puts you on the court.

Even with that amount of depth, it is still intuitive for non-gamers to pick this up.

The character creation mode is impressive. Like in Tiger Woods, you can create your face. The amount of customizations is impressive like Tiger, but seems a little harder to get it to look like you. But with time, you can mold your likeness to compete on the circuits.

There are multiplayer modes as you would expect but the bread and butter is matching up on Xbox Live and seeing yourself move up in the real-time leaderboard. It truly drives you to spend hours perfecting your tennis skills.

Pete Sampras, James Blake, Anna Kournikova and other pros make it in the game with their likeness created beautifully. The graphics are wonderful, fooling the eyes from afar as if it were the real U.S. Open.

The sounds are crisp and wonderful but there is no commentary during the match. It is a feature that is sorely missed. You do have the judges and the roar of the crowd backing you up, but more could've been done.

Regardless, this is an addicting game that no Xbox owner should be without, even if you don't like sports. This marks the first sports game where Microsoft can confidently declare their dominance.