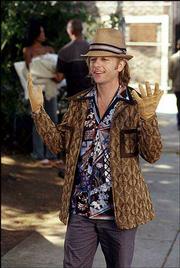 David Spade plays a washed-up actor from a childhood TV series who attempts to weasel his way back into the industry in "Dickie Roberts: Former Child Star."

Nobody oozes insincerity quite like David Spade. The comedian-turned-film star has made a career of delivering sarcastic barbs with a painted-on smile.

What better person to portray the fictional Dickie Roberts?

In this lampoon of Hollywood celebrity, Spade plays Roberts, a 30-something actor trying to regain a foothold in the entertainment industry. In the '70s, he was a child star of the TV hit "The Glimmer Gang," but when the show's ratings started to decline, his mother abandoned him ... and his whole fanbase soon followed.

Now a parking valet who hasn't landed a decent role in decades, the bitter Roberts is even reluctant to write a memoir about his experiences.

"I can't publish this now, because it ends up with me being a loser," he explains.

When he hears that director Rob Reiner is casting the lead in a movie that is sure to be a blockbuster, he auditions for the coveted role. But Reiner explains to Dickie that he is wrong for the part because he can't convey genuine emotions on screen since he "missed out on the basic foundation of adulthood, which is a childhood."

Convinced that he needs to relive the formative years he skipped, Roberts hires a surrogate family to give him a crash course in upbringing. The sleazy father (Craig Bierko) pounces on the chance to earn extra money, even though his reluctant but good-natured wife (Mary McCormack) and preteen kids (Scott Terra and Jenna Boyd) consider it a weird intrusion.

Ultimately, the struggling actor learns through his domestic interaction that there really is more to life than just a career in the spotlight.

Before it shifts into warm-fuzzy mode in the final act, "Dickie Roberts: Former Child Star" is a rather merciless satire of the fleeting nature of fame. The gags are especially strong during a hilarious intro where the star's tale is examined in an "E! True Hollywood Story" report.

Here it's revealed all the levels the man sunk to in his quest to remain famous. At one point he even legally changed his name to David Soul's Son.

Spade proves that it's plenty easy to mock former child actors, but it's actually enterprising to directly involve them in the plot.

Rarely have so many cameos been used so effectively. These range from a "Celebrity Boxing" match where Roberts is pummeled by "Webster" lead Emmanuel Lewis to a weekly poker match with fellow washed-up icons Barry Williams, Leif Garrett, Corey Feldman, Dustin Diamond and Danny Bonaduce. (Anybody else think this is an homage to the bridge game in "Sunset Boulevard" involving the spurned silent screen idols?)

David Spade stars as the washed-up title character in this merciless satire of the fleeting nature of fame. The comical casting of former child stars (Leif Garrett, Barry Williams, etc.) helps offset a dippy plot device about Dickie needing to hire a surrogate family to help him relive the childhood he never had.

Yes, the premise of an adult joining a family to relive one's childhood is ridiculous, but at least the execution of this dippy plot device is enjoyable. The casting helps ease the pain. As the mom, McCormack (best known for playing Howard Stern's wife in "Private Parts") projects the warmth and sincerity that her leading man often lacks.

And credit Spade and co-writer Fred Wolf ("Saturday Night Live") for generously giving his child co-stars some of the best lines. The youngsters are especially funny when helping their adopted "brother" adjust to the inherent dangers of children's toys such as the Slip 'n Slide and Water Wiggle.

"Dickie Roberts" is easily the most satisfying of Spade's starring vehicles -- although with "Joe Dirt" and "Lost & Found" on a resume, that's hardly saying a lot.

At least the jokester finally has found a character to match his smarmy, pop-culture-obsessed personality.