Washington — Anthony Kennedy likes to listen to the opera while working, Ruth Bader Ginsburg dreamed of a career as a diva, and Stephen Breyer has twice performed on stage -- albeit a half-century ago.

Who says Supreme Court justices are all law, no show biz.

Kennedy said it was ironic that one of the characters in Johann Strauss Jr.'s 1874 operetta is an inept lawyer whose client receives a longer jail sentence than he should. The crime: calling a police officer an idiot.

The justices, more accustomed to the bench than the stage, had small roles, playing guests at a royal ball.

"That's show business. You have to start on the bottom," Kennedy said during a pre-performance interview. "When you're at the bottom rung, you don't question orders."

Ginsburg, a confessed monotone, said: "It's nice. You get a very good view of what's going on."

The more conservative Kennedy concurred. "It's the best seat in the house," he said.

The trio make their entrance, the petite Ginsburg flanked by the trim tall Breyer and Kennedy, just in time for a solo by tenor Placido Domingo and exotic performance by tango dancers. The justices do not join in the dancing, a difficult undertaking in their long black judicial robes. They are introduced as "guests supreme." 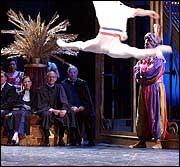 U.S. Supreme Court Justices Ruth Bader Ginsburg, Stephen Breyer, center, and Anthony M. Kennedy watch a ballet dancer as they play the roles of themselves in the Washington Opera's production of "Die Fledermaus" at DAR Constitution Hall in Washington.

The three preferred less official, and more theatrical costumes, but opera executives assigned them to play themselves.

"I'm tempted to hum along," said the 65-year-old Breyer, who last performed on stage as a 12-year-old.

Ginsburg, who is 70, said she was thrilled by the time on stage with Domingo, whom she describes as "a great phenomenon of the world."