Los Angeles — Singer-songwriter Warren Zevon, who battled death with the same twisted sense of humor found in his songs "Life'll Kill Ya," "Werewolves of London" and "Excitable Boy," has lost his yearlong fight against lung cancer at age 56.

Zevon, among the wittiest and most original of a broad circle of performers to emerge from Los Angeles in the 1970s, died in his sleep Sunday at his home, publicist Carise Yatter said.

"I'm just glad it was quick and he didn't have to suffer for much more time," said Zevon's music producer friend Jorge Calderon, who worked with the singer on a recent cover of Bob Dylan's "Knockin' on Heaven's Door." "I'm glad he's at peace."

Some of Zevon's favorite subjects were guns, desperation and encroaching doom. He taunted mortality in darkly humorous songs such as "I'll Sleep When I'm Dead," "Life'll Kill Ya" and "Things to Do in Denver When You're Dead."

Zevon announced in September 2002 that he had been diagnosed with terminal lung cancer and had only months to live.

In telling the world about his fatal illness, Zevon made a trademark joke: "Really, the thing I want is to last through the winter so I don't miss the new James Bond movie."

Help from his friends

After being diagnosed, Zevon spent much of the rest of his time visiting with his two grown children and working on a final album, "The Wind," which was released to critical acclaim last month. 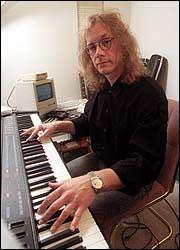 Warren Zevon plays a synthesizer in his West Hollywood, Calif., apartment in this Oct. 25, 1989, file photo. Zevon, who wrote and sang the rock hit "Werewolves of London" died Sunday. He was 56.

His son Jordan said recently that he thought the support from family and friends, which included an all-star cast of musicians who worked on that final album, helped prolong his father's life.

Zevon's family had noted that he lived far longer than was expected at the time of his diagnosis, long enough to see the birth of twin grandsons to daughter Ariel.

In addition to working, the singer also resumed smoking. "You make choices and you have to live with the consequences," Zevon had said in the past.

He released his first album, "Wanted -- Dead or Alive," to little notice in 1969, but gained attention in the '70s by writing a string of popular songs for Linda Ronstadt, including "Poor, Poor Pitiful Me," "Carmelita" and "Hasten Down the Wind."

They cemented Zevon's reputation as one of rock music's most politically incorrect lyricists, giving him a lifelong cult following that included gonzo journalist Hunter S. Thompson, former Minnesota Gov. Jesse Ventura and "Late Show" host David Letterman, who provided backing vocals on "Hit Somebody," Zevon's 2001 elegy to a professional hockey goon who longs to be a goal-scoring hero.

"I always like to have violent lyrics and violent music," Zevon told The Associated Press in 1990. "The knowledge of death and fear of death informs my existence. It's a safe, kind of cheerful way of dealing with that issue."

Other admirers included Dylan, whom Zevon cited as one of his principal songwriting influences and who performed on his 1987 album "Sentimental Hygiene." Still another was Bruce Springsteen, who co-wrote "Jeannie Needs a Shooter," Zevon's tale of a lover shot to death by a woman's jealous father.

His body of work also contained some straight-out comedy, including "Mr. Bad Example," "The Hula Hula Boys" and "Gorilla You're a Desperado." The latter told the tale of a Los Angeles Zoo ape who escapes by locking a yuppie in his place and going off to live in the man's apartment, only to end up depressed and divorced.

His compositional style reflected a number of genres, from hard-driving rock to folk, as well as classical, polka and other influences. In his final months, he summoned the energy to complete his last album, "The Wind." It includes the poignant "Keep Me in Your Heart," a cranky "Disorder in the House" and a remake of Dylan's "Knockin' on Heaven's Door."

Family and friends were arranging a small private memorial service to scatter Zevon's ashes in the Pacific Ocean, said manager Brigette Barr. A public memorial service may occur at a later date, she said.