Berlin — Leni Riefenstahl, whose hypnotic depiction of Adolf Hitler's Nuremberg rally, "Triumph of the Will," was renowned and despised as the best propaganda film ever made, has died. She was 101.

Riefenstahl died Monday night at her home in the Bavarian lakeside town of Poecking.

A tireless innovator of film and photographic techniques, Riefenstahl's career centered on a quest for adventure and portraying physical beauty.

Even as she turned 100 last year, she strapped on scuba gear to photograph sharks in turquoise waters. She had begun to complain recently that injuries suffered in accidents over the years, including a helicopter crash in Sudan in 2000, had taken their toll and caused her constant pain.

Despite critical acclaim for her later photographs of the African Nuba people and of undersea flora and fauna, she spent more than half her life trying to live down the films she made for Hitler and for having admired the tyrant who devastated Europe and all but eliminated its Jews.

Speaking to The Associated Press just before her 100th birthday on Aug. 22, 2002, Riefenstahl dramatically said she has "apologized for ever being born" but that she should not be criticized for her masterful films.

"I don't know what I should apologize for," she said. "I cannot apologize, for example, for having made the film 'Triumph of the Will' -- it won the top prize. All my films won prizes."

Biographer Juergen Trimborn, who wrote "Riefenstahl: A German Career," said she could not apologize because the Nazi films were the centerpieces of her career.

"One can't speak about Leni Riefenstahl without looking at her entire career in the Third Reich," Trimborn said. "Her most important films were made during the Third Reich -- 'Triumph of the Will,' 'Olympia,' -- that's what she's known for." 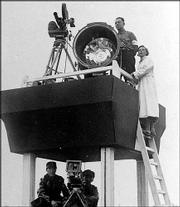 Filmmaker Leni Riefenstahl is shown at work during the Olympic Games in Berlin in 1936. Riefenstahl, who produced propaganda films for Adolf Hitler and was lauded for her mastery of film and photographic techniques, died Monday at age 101.