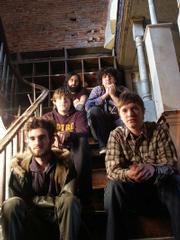 Sometime about two years ago, while high on peyote and stranded in the desert, Christopher Crisci's fox spirit appeared to him and delivered a golden tablet inscribed with the words to The Appleseed Cast's sixth album.

"God said, 'You are going to write an album called "Two Conversations," says Crisci, the guitarist and lead vocalist for the Lawrence-based band.

With his gruff full-neck beard and eyes obscured by a trucker hat, Crisci is almost able to mask the playful look taking over his countenance.

"That's just what we like to tell people," adds drummer Josh Baruth.

Crisci's sportive tales are forgivable given the amount of interviews the band has been doing in the month since the release of "Two Conversations." He and guitarist Aaron Pillar have been fielding phone calls from places as far away as Japan thanks to a new label arrangement that will distribute "Two Conversations" in Europe and Japan.

"The Get Up Kids must be so big in Japan cuz they're always like, 'So, you're friends with the Get Up Kids? So, do you know Rob? So, how's Matt?'" says Pillar. "Yeah, I mean, fuck, I see the guys but they don't have anything to do with our band."

Tigers and owls
Though AC has probably spent just as much time, if not more, on the road as its Lawrence peers, the band only now seems to have the opportunity to achieve a level of notoriety similar to the Get Up Kids. In December, AC will embark on its first-ever tour of Japan, followed by a return trip to Europe in next spring.

"I kind of told myself I'm ready to put both feet in and just be like, 'Fuck it,' it's either gonna work or it's not," says Pillar.

Since Pillar and Crisci relocated the band from Los Angeles to Lawrence in 1998, AC has released five albums on Deep Elm records and toured constantly. The band's first two albums - "The End of the Ring Wars" (1998) and "Mare Vitalis" (2000) - were divisive affairs: fans loved the intimate lyrics and melodic rock hooks while critics panned the band for sounding like popular emo bands of the time, like Mineral and Sunny Day Real Estate.

"Every now and then I'll read a review and I'll listen to it too much and I'll take it like she's smarter or he's smarter than I am," Pillar says. "But I don't think I've ever not bought a record that I wanted to get because of the review."

AC made converts of many of its sharpest critics with Low Level Owl Vols. 1 and 2, two discs released separately during the last two years. The project experimented with long and hypnotic instrumental passages, delay-soaked guitars and monstrous walls of sound. A reviewer for allmusic.com went so far as to call them, "America's answer to Radiohead."

But for all the critical praise Low Level Owl received, album sales were slow. The album never made it to college radio and lacked effective promotion, something the band hopes to change by signing to Tiger Style.

"Now we're going to go on tour and people actually will recognize some of the songs, whereas last time, six months into it people are just figuring out what songs they want to hear," Baruth says.

"Two Conversations" debuted at No. 15 on the college charts, a very high mark for a band sending their first disc to college radio. Tiger Style also helped connect AC with a respected publicity firm (Fanatic) to promote their tours.

"We called Tiger Style to see if they could send us some posters and they were like, "We already sent out 10 to everywhere you're going," Pillar says. "It's nice to have all that stuff done for you."

Only one of the new album's 10 songs clocks in over five minutes long. a drastic departure from the slow-building style of Low Level Owl. Too, Crisci's vocals - often indecipherable on Low Level - are more prominent, emphasizing the story he weaves throughout the album.

"The first five songs are about a relationship falling apart," Crisci says. "There's a lot of political imagery in there through, and it's really kind of an allegory for how I feel America is falling apart, or the whole world situation now is just getting out of hand. The second five songs are about a relationship that's been over for a long time and finding the value of friendship versus romance in someone."

Crisci's foray into politics - least veiled on repeated references to "Stripes on Fire" - marks new territory for a lyricist best known for his heart-on-sleeve relationship prose.

"We've always been chatting about conspiracy theories," he says. "One of our favorite things to do when we first started touring in '97 was listening to Art Bell at four in the morning, which was all about silly aliens and UFOs and shit like that."

An apple a day...
The band's Sept. 12 show at the Bottleneck will kick off a brief Midwest tour. Baruth says touring has become less of a stress-factor since the band has begun making enough money to afford hotels.

"It's fun to stay at people's houses once in a while and just ghetto it, but it's nice to have a shower," said Baruth, who while on the road answers to the name "Cobra."

"My friends in college started calling me that cuz there were two Joshes we hung out with," he says. "It caught on, everyone in the country, everyone in the world for that matter. Go to Europe, people are like, 'That's Cobra.'"

Pillar says he has no regrets about moving the band to Lawrence, through he still feels ties to California, where he lived for 26 years.

"For awhile I think we weren't known as a local band cuz we had moved from California," Pillar says. "I think we've earned that right. We've all lived here long enough and we've spent enough money at the bars."

"I just hope it doesn't change too much. I don't care if West Lawrence wants to be its own town, they can break off. Mark my words, seriously, there will be two cities here within 10, 15 years. Basically what I'm saying is the new scene: Tonganoxie."