P.N. 03 has all the makings of a killer action title, but fails to deliver anything worthwhile.

Last year, Capcom announced five exclusive games for the Gamecube: Viewtiful Joe, Dead Phoenix, Resident Evil 4, Killer 7 and P.N. 03 (Product Number 3). Dead Phoenix has since been cancelled, Viewtiful Joe is getting rave reviews overseas, Resident Evil 4 and Killer 7 are creating much ado with their incredible looking art direction. Gamecube owners get their first taste of the new Capcom games with P.N. 03. Coincidentally, it is probably the worst of the bunch. 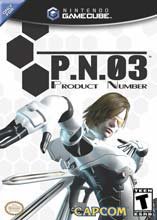 When you jump into the game, you are met with fast and furious gameplay. Your heroine, Vanessa, shoots tons of electro-balls gracefully from her palms, while jumping in and out of robot gunfire. The first impression is great. But once the game gets a bit harder, the controls start to annoy. For some reason, Capcom created this game to be fast and furious but the controls can't keep up. No matter if you are trying to strafe, roll or jump, Vanessa never responds fast enough to keep up with the game itself.

Then the pessimistic snowball effect takes over. You start to notice that every room looks like the same drab gray. Literally. You find yourself almost confused as if you were just in the same room. Of course when you enter another room, no door opens. The game just fades to black, stifling the action so there is no congruence in gameplay. Then, you notice that you see the same enemies over and over and over again. To top it all off, the camera will start playing mind games with you, not allowing the enemies to be seen for a second. So you'll get shot before you even knew you were supposed to dodge. Brilliant.

Looped techno beats are repetitive but fitting with the tedious gameplay. All other sound effects are consistently generic with little reward to listen intently for subtleties.

No time or care was taken to polish what could have been an interesting action game in the vein of Devil May Cry. It may be worth renting. But the good news for Gamecube owners is that the other exclusive games are or are looking amazing.