Class is back in session at the New York High School for the Performing Arts. Only this time it's at the Lied Center.

No it's not some sort of magnet program. It's "FAME-The Musical," the stage version of the Oscar-winning movie and popular television drama.

The musical, brainchild of "FAME'S" original creator David De Silva, tells the story of aspiring young entertainers attending the prestigious high school. (De Silva based the story on the La Guardia School of Performing Arts in New York, which has launched the careers of Al Pacino, Liza Minelli, Jerome Robbins and others.)

The audience gets to see first-hand the trials and triumphs of youth as they struggle to realize their dreams of dancing, singing and acting. Showcasing students from many different cultural and economic backgrounds, the plot begins at auditions and follows the students through four years of hard work until graduation.

Although the musical provides flashy song and dance numbers, De Silva also tries to stress the importance of being literate, persevering and avoiding drugs.

"I always believed that in an ideal democratic society, having the opportunity to get out of your neighborhood or ghetto and go to a specialized school to study something you're good at, be it computer science or performing arts, offers the greatest preparation for the competitive world we live in," De Silva has said.

John Staniunas, associate director of theater and film at Kansas University, says the musical holds another important message about fame and celebrity.

"It is not glamorous; it is cutthroat," he said. "It is more than talent, ambition, desire and hope."

The show, which opened at London's Cambridge Theatre in 1995, has been described as "equal parts MTV splash and Broadway pizzazz." 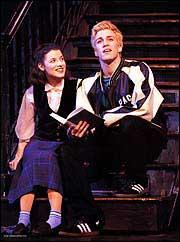 Cast members of "FAME--The Musical" dream about their futures in performance. The show, which is the stage version of the Oscar-winning movie and popular television drama, comes to the Lied Center at 7:30 p.m. Saturday.