Mick Braa is willing to bet 75 percent of people who live in Lawrence don't know the Lawrence Chamber Orchestra exists.

That's a tad troubling given the orchestra's 30-plus-year history in town. 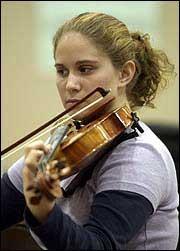 Cori Simmons, a Kansas University junior from Overland Park, practices J.S. Bach's "Coffee Cantata" on her violin with the Lawrence Chamber Orchestra. The orchestra has its first concert of the 2003-2004 season on Sept. 21. Simmons practiced on Tuesday.

"Overall, anywhere, art music or classical music is a little bit harder sell than some of the popular forms," says Braa, the orchestra's new general manager.

"The orchestra has been around for over 30 years, and yet it hasn't developed a very prominent community identity. We'd like to begin a step-by-step process of improving that presence in the community."

The process will involve bringing more variety to the orchestra and attempting to educate the community about chamber music, Braa says.

"I think a lot of people don't understand exactly what a chamber orchestra is," he says. "I try to explain to them (it's like) if you think about a regular orchestra without all the horns and drums. ... The music is a little more soothing and a little more resonant without being brassy and loud."

Despite the tradition of small chamber ensembles -- trios and quartets aren't uncommon -- the Lawrence orchestra maintains a collection of about 30 players. That way, a program could include a string quartet followed by a full concerto played by 20 to 25 musicians.

"Increasing the number and variety of instrumentation (allows us to) play a wider repertoire of music that might appeal to an increased audience," Braa says.

The orchestra's first concert of the season features music by a composer whose name at least, if not his works, are known even outside the classical community: Johann Sebastian Bach.

The orchestra will play music by Bach and his son, Carl Philipp Emanuel Bach, under the direction of guest conductor Steven McDonald. A Kansas University early dance ensemble under the direction of Joan Stone will join the orchestra for J.S. Bach's Suite for Strings, and vocalists Benjamin Winters, Andrew Graves and Ashley Winters will sing during his "Coffee Cantata."

In tune with educating audiences, the concert program will include notes about the pieces being played, and McDonald will be speaking between numbers, particularly before the "Coffee Cantata," which he says benefits from being put in context.

The 1732 piece was Bach's answer to an ongoing battle between a father and his daughter, who is obsessed with drinking coffee, a beverage that had only been introduced to Europe within the previous century and had not yet gained public favor. The father issues a husband-or-coffee ultimatum to his daughter, and the feud ends with a twist.

McDonald says the story is no different from teens today who would rather hang out at Starbucks with their pals than do their homework.

One thing that has changed since Bach's time is public interest in classical music, especially in the United States. McDonald attributes that lack of interest, in part, to misperception.

"Unlike in Europe, where people go to concerts and the opera like we go to baseball games, I think that there is perception in the public's mind ... that this type of music or great art or literature is only for certain people," he says.

"The perception of white tie and tails can tend to keep people away from it. Rather than changing the music or changing what we do to bring it to people, I would rather see these walls come down."

It doesn't hurt for people to understand the quality of musicians involved, Braa says.

"We recruit very good players from the professional, academic and even the better student ranks, particularly graduate students from KU," he says. "There's a wide variety of people from the whole northeastern Kansas area.

"At a time when a lot of classical music groups in communities have disbanded, we're still going year by year, we still exist and we still manage to pay our musicians a little something. It isn't really what they're worthy of ... but at least we're paying them enough to make it worthwhile for them to cover some of their expenses."

The orchestra occasionally brings in nationally and internationally known guest conductors. Zuohuang Chen, who is artistic director and principal conductor of the China National Symphony Orchestra and has guest conducted more than 30 orchestras around the world, led the group's April concert.

A number of the musicians play with regional orchestras, such as the Topeka and Kansas City symphonies.

"There's this high quality of musicianship in the area that most people really aren't aware of," Braa says.