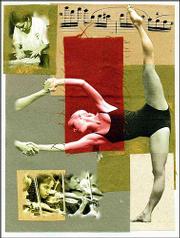 "School of Fine Arts" is an institutional name.

It denotes campus buildings, administrators and academic departments. It sounds lofty ... and lifeless.

But that's just the facade.

Compress the student and faculty artists and performers and their diverse works into one hall for 90 minutes, and a dynamic picture begins to form.

The school calls it a Collage Concert -- an artistic composition formed from an amalgam of media and genres.

It's the only time all year the art, design, music and dance departments collaborate for one show.

"You really get a sense of who makes up the fine arts school and what they're doing, how they're touching lives through the arts, through the whole array of the arts," said Diana Carlin, Fine Arts Advisory Board member and dean of KU's graduate school and international programs.

"You come to realize what wonderful artists we have over in that school. It's a wonderful showcase -- a very good recruiting device also."

The fast-paced concert, which coincides with KU's Open House weekend, is at 7:30 p.m. Friday at the Lied Center. Proceeds benefit the School of Fine Arts.

Sum of its parts

"The School of Fine Arts is divided among three academic departments in four separate buildings. I saw a need for bringing together the faculty and staff or the three departments and in showcasing the many talents of these individuals for the community," Montgomery said in an e-mail from Northwestern University, where she's beginning her stint as dean of the music school.

"The Collage Concert was a huge success. I remember sitting in the audience during the first concert, which took place on a glorious and sunny Sunday afternoon. We had barely 100 in the audience. The numbers have increased to nearly 1,000 during the second and third years."

"The Collage Concert works particularly well to get people aware of the multiple aspects of the School of Fine Arts," he said. "It is important that we present the totality of the school because we have quite a remarkable reach."

Not only do the concert and silent auction highlight student talents, but they also help them develop those talents. Funds raised for the school go toward scholarships, and money raised for the enhancement fund sends students to competitions and exhibitions off campus.

"It allows them to participate," said Barbara Nash, co-chairwoman of the board's special events committee. "You sit in a room for so long, it really helps you to get out and see the world."

Little bit of everything

"The first Collage Concert ran too long," said board member and artist Barbara Nordling. "Now they make it 90 minutes, and a smattering of everything is covered. I just find it real exciting because it's just a showcase of the very best that we have and how broad a scope we cover."

Here's a look at the lineup: