Networks geared up for fall

New York — Rob Lowe has left the White House for a law firm. Whoopi Goldberg is a hotel operator with a razor tongue. Mark Harmon investigates crimes in the military. Kelly Ripa is a washed-up soap star.

A new television season begins next week -- time to stretch your imagination to see old friends in new roles.

Television executives dream, too. Of bountiful ratings. Fortune magazine covers. All of their strategic moves paying off.

CBS is bidding for another year as the nation's most popular network, hoping the public's taste for crime and legal tales doesn't run out. NBC, most popular with younger viewers that advertisers pay premiums to reach, awaits the last year of "Friends" and "Frasier."

Fox wants to build on some unexpected successes. ABC is trying a novel, new strategy -- stability -- that was thrown for a loop with the death of John Ritter. UPN is looking to arrest a decline and the WB wants to keep those teenage girls happy with a hunky new "Tarzan."

The conventional wisdom holds that this is a crucial year for NBC. Two of its most popular comedies face swan songs. "The West Wing," after an unexpected decline last season, is without creator Aaron Sorkin. Perennial favorite "ER" is being challenged for the first time, by CBS' "Without a Trace."

NBC's failure to develop new comedies also has been a worry.

This season, NBC tries two bold comedic approaches: "Whoopi" uses the topical humor of Norman Lear as an inspiration, and the frank sexual talk of "Coupling" clearly has "Sex and the City" in mind. Lowe stars in the drama "The Lyon's Den."

"You can't replace something like 'Friends' until they go away," he said. "'Seinfeld' only really emerged, even though it had been on the air, after 'Cheers' went away." 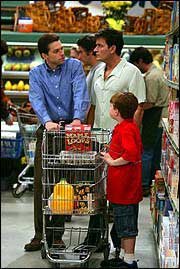 Jon Cryer, left, Charlie Sheen and Angus T. Jones appear in this scene from CBS' new fall show "Two and a Half Men."

CBS has adroitly learned how to program to the public taste, and to its older audience. This is the network where a new David E. Kelley series ("The Brotherhood of Poland, N.H.") features pudgy guys in their 40s instead of chic, sleek women. Harmon's "Navy CIS" is exactly as its name suggests, a cross between "JAG" and "CSI: Crime Scene Investigation."

The biggest risk is pushing familiarity too far. Following "CSI's" ascendance as TV's most popular program, CBS will have nine criminal or legal dramas on the air this fall.

"If you have something that works, you don't have to copy it 25 times," said Roy Rothstein, an analyst for Zenith Media Services, an ad buying firm.

ABC narrowly missed the embarrassment of dropping behind Fox to fourth last season. A series of eye-popping executive blunders has hurt. The latest was last spring, when ABC cast much of its regular schedule aside in favor of chintzy reality series.

"It was a huge mistake, and not just with our viewers but with our whole perspective of the network," said ABC Entertainment President Susan Lyne. "In the end, maybe it was good because it did make us cognizant of the fact that it's a marathon here and not a sprint. Our whole summer strategy came out of that experience."

That strategy was to keep airing its comedies relentlessly and, as a result, shows such as "According to Jim" and "George Lopez" are slowly building a fan base.

New shows this year feature Ripa attempting broad, physical comedy, and some fish-out-of-water tales that Lyne hopes play for laughs: a New Yorker moving to Kansas, a teacher marrying a movie star and a couple with one set of conservative parents and two gay dads.

Fox's fall performance is invariably hard to predict because, with the baseball playoffs and World Series, several of its shows won't start until November.

"The traditional way of looking at our rollout or anybody's schedule is really obsolete," said Gail Berman, Fox's entertainment chief. "This is really a year-round business. And everybody's business is a different business."