New York — Have you ever wanted to touch a piece of the universe?

The newly renovated Arthur Ross Hall of Meteorites is reopening Saturday at the American Museum of Natural History, allowing visitors to again come in contact with objects as old as the sun.

"We display some of the first rocks formed in the solar system," said Denton Ebel, curator of the hall.

The exhibition centers on Ahnighito, a 34-ton fragment of the 4.5 billion-year-old Cape York meteorite that hit Greenland 10,000 years ago. A new, raised platform brings visitors right up to the rock, which is so heavy that its supports go through the floor all the way down to the bedrock below the museum.

On the circular walls around Ahnighito are sections on the origins of the solar system, the development of planets and the role of meteorite impacts on Earth.

"We are delighted to offer ... even more vital information about the formation of our solar system and the planet we call home," Ellen Futter, president of the museum, said Monday.

The impact section includes an assessment of the likelihood of a meteorite of any catastrophic size hitting the Earth. (Don't worry, it's not likely.)

"There has been no large, crater-forming impact on Earth in human history," Ebel said. "Big impacts are extremely rare and really big ones are even rarer."

The Hall of Meteorites first opened at the museum in 1981. The renovation reflects the advances in the study of meteorites since then, as well as Ross' desire for the gallery to have the kind of presence that is seen in other parts of the museum, such as the Rose Center for Earth and Space, Ebel said.

One of the changes includes the labeling of some of the museum's meteorites as being from Mars. When the hall first opened, that wasn't definitely known, Ebel said.

Other changes include a scale model of Meteor Crater in Arizona, as well as a section of a football-size meteorite that hit a car in Peekskill, N.Y., in 1992, and stones from the museum's collection that have not previously been on view. 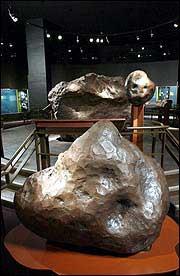 The centerpiece of the newly renovated Arthur Ross Hall of Meteorites is a 34-ton fragment of the 4.5 billion-year-old Cape York meteorite that hit Greenland 10,000 years ago. The Arthur Ross Hall of Meteorites at New York's American Museum of Natural History is re-opening Saturday, allowing visitors to once again come in contact with objects as old as the sun. In foreground are two smaller pieces of the same meteorite, known as the Woman and the Dog.