"He represented the best of America; we're not going to see his like again," said singer-songwriter Kris Kristofferson, who wrote Cash's 1970 hit "Sunday Morning Coming Down."

More than 1,000 people attended the private two-and-a-half-hour service at First Baptist Church of Hendersonville, about 15 miles north of Nashville -- the same church where Cash mourned the death of his wife, June Carter Cash, in May.

Cash, 71, died Friday of respiratory failure caused by complications from diabetes. He had been in declining health for years.

"I can almost live in a world without Johnny Cash because he will always be with us," said Cash's daughter, singer Rosanne Cash. 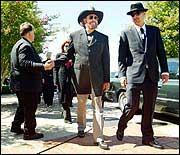