You've seen them around town: the yellow bumper stickers with the caricature of the guitar-strummin' cowboy in the oversized hat.

These mysterious stickers have the power to create conversations between total strangers. They cover RVs, hippied-out buses, and otherwise clean-cut cars with sun-bleached shades of yellow. And they remind the thousands of people that attend the Walnut Valley Festival every year that it's high time to get a week off of work.

Year after year the Winfield faithful pack the Cowley County Fairgrounds with tents, motor homes, trucks and converted hearses. They come because every September, Winfield (a 12,000-person town 45 miles southeast of Wichita) is transformed into a folk and bluegrass Mecca; a hallowed place where the official performances end at midnight but the campground jamming never sleeps.

"It's one of the oldest and most significant gatherings in the United States for traditional music," says Dan Crary, a flatpicking guitarist who has performed at the festival since it began in 1971. "There's probably no festival in the world that has better jamming at night."

All of this means relatively little to Jeff Williams.

"I just go to play music with friends and camp all day," says Williams, a banjo and guitar player for the Lawrence band Saddle Rash. "You wake up when the sun gets too hot and you can't stand it in the tent, have a beer, and just sit around and play all day."

Like hundreds of other faithful, Williams and friends will arrive at the festival a week early to camp out. They'll gladly drop $7 a day to camp and $70 for a four-day pass to the festival's official stages.

"It's totally worth it," Williams says. "You pay $40 to go to Lollapalooza and it's only two stages. Here you got five stages and four days of music -- all day."

Some 17,000-plus people see it Williams' way. With a crowd that size -- hundreds of which camp for more than a month straight -- organizers have a huge job just to provide security and order. Organizer Rex Flottman says he has to kick a few people out of the festival every year, usually for drinking too much and causing problems.

"After they're sobered up if they want to spend another $70 they can come back in," Flottman says. "After about the third time it's like, 'Why don't you just go home?"

With sleep at a minimum and health at a premium, proper camping preparation can separate the "pickers" from the "sickers." Jon Erlinger, a four-year veteran of the festival, recommends bringing a sack of potatoes, a jug of whiskey and a sleeping bag.

"You don't want to buy the food -- it's too expensive," says Erlinger, a steel guitarist for the Lawrence bluegrass quartet Two Dollar Shoes. "Baked potatoes are the best on a grill. They fill you up real fast and pad your stomach so you can drink."

Late at night and into the early morning, Erlinger and his friends drift through the campgrounds joining jam sessions in the narrow streets. Many of the rowdiest jam sessions often take place in the Pecan Grove area, where strangers meet to play the songs of Bill Monroe, Flatt and Scruggs and unknown composers of traditional songs like "Shady Grove" and "The Cuckoo."

"If you want to sleep don't camp in Pecan Grove; there's too many people and they're all drunk and they're all loud," Erlinger says. "Plus, you'll hear rednecks having sex."

Pickers and grinners
A lot of the allure of festival is the diversity of performers, both on stage and off -- there's everything from bluegrass to country, folk, Celtic and Cajun music. Many of the performers, like cowboy singer Bill Barwick and guitar wizard Tommy Emmanuel, are veterans of the festival, returning each year to bigger crowds and better time slots. The festival also attracts top pickers to the contests for banjo, guitar, mandolin, dulcimer, fiddle and autoharp. The annual contests boasts past winners like Mark O' Connor and Alison Krauss (who won as a 13-year-old in 1984).

This year's biggest newcomer might be The Yonder Mountain String Band, a bluegrass band from Colorado that mixes traditional song craft with "newgrass"-flavored jamming. The band, which regularly packs Lawrence venues like The Bottleneck and Granada Theatre, was scheduled to perform last year but missed the festival due to an illness in the band.

Another group rising in popularity at the festival is The Wilders, an old-time county and bluegrass quartet known for their energetic stage show. The band has performed at the festival the past four years and has earned enough of a following to secure a primetime Saturday night slot this year. 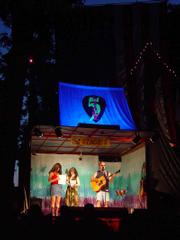 Fiddler Betse Ellis says she has learned to balance sleep with late-night jamming in the campgrounds.

"By Saturday night we might try and slip out to our hotel room so we can actually perform Sunday morning," she says.

Outcast bluegrass
Outside of the main stages there exists another group of entertainers: bands that are not officially invited to perform but play yearly to huge crowds at the makeshift Stage Five in Pecan Grove. Probably the best-known Stage Five performer is Split Lip Rayfield, which will return from a one-year absence at the festival. The blazingly fast punk-rock bluegrass band regularly tops the write-in vote from audiences of who they'd like to see at the next festival. But gas-tank bassist Jeff Eaton says the band has never received an invitation to perform on the main stage.

"It might be a blessing in disguise that we just play at Stage Five," Eaton says. "I wouldn't want to be obligated to play two shows a day and do workshops."

Eaton says Split Lip might never have happened were it not for Winfield, where he, guitarist Kirk Rundstrom and mandolin player Wayne Gottstine befriended banjo player Eric Mardis. The group's campsite in the Pecan Grove is typically overrun with fans eager to hear the group play in an informal setting.

"People always come up to our camp and ask, 'When are you going to be jamming?'" Eaton says. "Having a good ol' jam is what it's all about, but if it's scheduled it's not a jam."