If the Simpsons got sucked into their TV while playing Grand Theft Auto: Vice City, this is the game that would result.

By by Nick Farrore - gamer contributor

In a world where games translate horribly to movies and vice versa, one of our favorite T.V. shows finally gets an awesome translation to the home console. Simpsons: Hit & Run not only faithfully reproduces the show's humor and feel, but is extremely addicting. 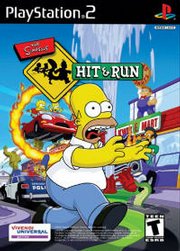 Ever since Bart vs. the Space Mutants on the original Nintendo, critics have panned nearly every Simpsons game. Sure, we loved that on the old school Nintendo because it was the Simpsons, it was "wrong" to watch such a "nasty" show where the main character said "Eat my shorts" and we were eleven years old. But in reality, that game did suck.

Fast forward to 2003, the Simpsons is still among the funniest shows on television and the extreme right wing now views the Simpsons as a family show rather than satanic.

First thing first, from missions to gameplay mechanics, Hit & Run is a complete rip-off of Grand Theft Auto. You have tons of places to randomly explore while having a linear series of objectives. You can jack any car or jump around the environment ala a platformer. If it was a mature-rated game that wasn't comedic, the rip-off would be inexcusable. But it's the Simpsons. The rip-off is acceptable because you get so wrapped up in the Matt Groening-injected comedy.

While on "missions" you will run into the many characters portrayed in the series. Their voices are acted by the same actors as the show and the dialogue is up to par with the actual writing in the show. This basically means that you will laugh so hard at times you may miss certain hints. Although it won't matter since the game is fairly easy...but you won't finish this content-filled game under ten hours.

You can play as Bart, Homer, Marge, Lisa and our Kwik-E-Mart Favorite Apu in their specific levels. Bart and Homer have two levels a piece, being that they're the two most popular characters in the show.

Unlike GTA, the action isn't full of guns and knives, but rather punching, kicking and, as the title suggests, running over things with your car. It's nothing you wouldn't see in the actual show. Also like GTA, if you damage enough people or property, the cops will chase you. But in Hit & Run, the cops almost always catch you to give you a measly 50 coin ticket.

The graphics take some getting used to if you've never seen the crew in a 3D environment. After you're used to it, you are served with a no-frills attempt at particle effects and shadowing, but that's excusable since the feel of Springfield is recreated superbly. Although the frame rate takes a hit often and when you are not driving, the camera tends to act like a four-year-old child in need of Ritalin. It's a shame because it does detract from the overall experience.

If you've ever wanted several different remixes of the Simpsons main theme, you're in luck. But for me, I am almost sick of the creative melody after playing Hit & Run. Other sound effects are great. As I said before, the actual character voices add a ton to the experience.

With a bit more polish, it could've been a surefire winner. Regardless, it's fun for any age and an absolute must-have for Simpsons fans.