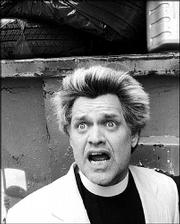 The Reverend Billy will preach his unique gospel at various spots around Lawrence throughout the week.

Reverend Billy is coming to town.

He is going to save us from our sins and exorcise our demons.

Well, maybe not ... but he does have a few things to teach.

Bill Talen, also known as Reverend Billy, is bringing his own unique brand of performance art to Lawrence to entertain as well as educate in a six-day residency at Kansas University. The Reverend is a founding member of the Church of Stop Shopping. This unique institution arose out of Talen's frustrations with the corporatization of America.

"In 97-98, with the Disneyfication of Times Square, I started preaching," Talen says. "As I preached my Mickey Mouse-is-the-Antichrist theology, I felt the important thing to do was defend public space against the encroachment by bully cops and transnational capital."

Despite being led away by police while handcuffed to a Mickey Mouse statue, it was this first public appearance at the New York Disney Store that began him on his way. Since beginning his crusade, Starbucks, The Gap and Wal-Mart have also felt his wrath.

Reverend Billy claims his protests and performances are not for purely selfish reasons. He is giving citizens back their lost voices.

"I have actually come to believe that the attempts by corporations to shift the common (man) into the interior of their stores was a make-or-break political issue," he explains. "It was a direct attack on the idea of being an American who is free."

Just as Reverend Billy has tried to clean up the corporate chaos of America, he now sets his sights on becoming the nomination of the Republican Party.

"I believe what we have now in Washington is one political party, with two sets of clients," he says. "I think that we have to stand outside the process right now and comment back at it."

Taking theater to the public

Working on the West Coast for several years as a poet and producer of plays, Talen served as artistic director of the Life on the Water theater Company in San Francisco from 1985 to 1994. He was also a starting member of the O Solo Mio festival that featured readings from such performers as Spalding Gray and Danny Glover.

However, he eventually grew weary and embarked on a pilgrimage to create his own character.

Eventually he developed his character into an evangelist, but he decided the Reverend would inhabit non-theatrical pulpits.

"I made the decision that theater was no longer in the theaters," he says. "Or at least a lot of the theater that did not interest me was in the theaters. I started seeing public space as being very important."

Although some may view Reverend Billy as a parody of Jimmy Swaggart, Talen's gospel is more than a parody.

"If that is all I was, I would be a 'Saturday Night Live' performer," he vents. "They consolidate existing values rather than the subversive people who have changed our culture like Andy Kaufman, Richard Pryor. These are the people I key on for my inspiration."

Out of his frustrations of the big sweatshop industries and the grief over 9-11, Reverend Billy along with director Savitri Durkee, composed a one-man show called "Other Love."

"The arts community at the time was reeling because of financial devastation but very few people were coming out in a forward way to talk about the disappointment we all felt with the administration's reactions," Durkee says.

The response from Talen was to use his alter ego to vent his frustrations.

Bringing a show like this to the Lawrence community and the students at KU is a perfect outlet for Talen and Durkee.

"One of our goals is to activate students toward their own local politics," she says. "To take their energy to the local community, to look at how national issues -- like sweatshops -- are happening in their community."

While holding church in Lawrence, Reverend Billy has many activities planned. He will have several lectures at KU, a workshop performance at Lawrence Community Theatre, a noon vigil at the Douglas County Courthouse, a parade, an "intervention" at Seventh and Massachusetts streets, and two special performances of "Other Love."

"This is a very special place," he says. "I wish that we had neighborhoods in New York City that were as conscious about the importance of letting the future be touched by the past."

Although the Reverend does not approve of Starbucks and The Gap, he is encouraged by such local businesses as The Raven Bookstore and Ernst & Son hardware.

"It puts the transnational chain stores together," he says. "It doesn't give them the chance to sneak in with their foreign economy. They are put out there in their own chain store ghetto. I like that very much."

So does Reverend Billy think Lawrence needs to be saved?

"I think I need to be saved by Lawrence," he says.