Between a rock and a sacred place

Bill Kurtis used to take visitors to a particularly scenic spot on his Red Buffalo Ranch near Sedan and ask them to remain silent for 60 seconds.

"If you listen carefully," he'd say, "you won't hear any man-made sound. You will hear the land speaking to you."

Katherine Harzman/Special to the Journal-World

Lawrence artist Stan Herd admires the view from atop stones in "Prairiehenge," the rock sculpture he's creating on Bill Kurtis' Red Buffalo Ranch in Sedan. Below, he sets limestone pavers in the floor of the ellipse that forms where the work's two stone circles overlap. Herd worked on the piece last weekend in preparation for a public dedication ceremony Saturday.

Kurtis has decided it's time to speak back, and he's chosen Lawrence environmental artist Stan Herd to be the translator.

Herd has devoted several days a week for the past year erecting monolithic stones on a site atop a small hill that rises out of a blackjack oak grove overlooking a valley where the Middle Caney River and Pool Creek conjoin in southeast Kansas. Kurtis calls the earthwork "Prairiehenge," after the mysterious ancient rock formation in England.

"The artwork integrates perfectly with the ranch," says Kurtis, a television broadcaster and Kansas University graduate who grew up in Independence. "The location looks as if it was waiting for a sculpture to provide a lookout in all directions."

After months of maneuvering massive limestone nuggets with front-end loaders and huge trucks, the primitive-looking, half-acre earthwork is nearing its finished form. Two circles of stone -- one 77 feet, the other 60 feet in diameter -- overlap to form a central ellipse that's 40 feet long and 15 feet wide. The largest piece weighs 13 tons -- two to three times the weight of an adult African elephant -- and juts 12 feet into the air.

"The piece pays tribute to both the last remnant of the tallgrass prairie and the native people that were there prior to our arrival," Herd says of the Osage Indians, who once inhabited the area. "It's kind of a monument to the Osage and to the prairie."

Kurtis will lead a reception dedicating the monument Saturday afternoon at the ranch. Following the dedication, Kurtis' Art of the Prairie gallery in Sedan will premiere a series of 24 Red Buffalo paintings Herd created during his yearlong residency in Sedan.

Not set in stone

Herd, who's made a living manipulating nature into works of art, borrowed "Prairiehenge's" circular form from a long line of cultures that have viewed the symbol as sacred.

"The design was just an aesthetic approach originally, and then, over a period of time, I've started to think about what they (the circles) meant," he explains. "One is the ancient circle, which represents the land and the Osage, and the second circle is our contemporary approach to the land, including Bill Kurtis' philosophy about rejuvenation of the prairie and salvaging this last remnant of prairie."

The interface between those two worlds -- the central ellipse -- "is a common ground for us to meet and talk with the Osage about what's happening with the land," Herd says.

It's also the most detailed component of the piece. Herd spent last week digging shallow holes in the ellipse and hand-laying a limestone floor composed of 2-inch-thich shards from a nearby quarry. (Local rock experts have helped Herd retrieve all the stone for the project from within a few miles of the site). The ellipse also will contain upright stones arranged in a stair step that visitors can ascend to get a better view of the ranch.

When Herd started "Prairiehenge" about a year ago, he intended to finish it long before now. But characteristically fickle Kansas weather threw a wrench in the schedule.

"We didn't want to destroy the prairie to build a monument to it," he says. He plans to consult members of the Osage nation, some of whom will be on-hand for the dedication, for further input on the piece. "I'm going to probably work on it off and on over the next year when I get a chance, without the pressure, and let it evolve through interaction with other people who can bring things to the table as far as the final look of the work."

From the air, "Prairiehenge" just looks like two imbricate circles. But the stones are set 12 feet apart, inviting people to interact with the piece.

"I think it will be a spiritual experience for some and a visual experience for others," Kurtis predicts. "Visitors can climb on the rocks to view the river valley, high plains to the west and green rolling pastures to the north and east.

"The interlocking circles accomplish what art is intended to do: to focus your mind on what it means. When the visitor does that, in this marvelous natural setting, I think they will see and feel the real Kansas, the land itself, and reflect on those who were here in the time of the buffalo and then the sacrifices and physical efforts of Europeans who joined them." 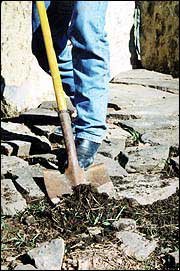 Herd, who's made headlines in recent months for his bureaucratically entangled proposed land portrait of Jose Mart-- in Cuba, is perhaps best known as a crop artist. He created the corn maze at the Pendleton farm east of Lawrence and a portrait of world-famous aviatrix Amelia Earhart in Atchison.

Most of his early works were best viewed from an airplane, and many were temporal in nature, getting plowed under with the crop at season's end.

But during the past decade, Herd has expanded his palette. His flower bouquet on the Kansas River levee is "painted" entirely in colored stones.

"I've just slowly incorporated more and more stone into my works to give it some permanency," Herd says. "I've done enough of the field works that I've lost some enthusiasm for that type of thing. The rock work is a new step for me. As all writers and artists and poets and musicians say, we're always looking for something new that generates excitement in the artform."

The 9,000-acre ranch's permanent residents seem to like the stones as well. Herd often works within a few feet of curious buffalo.

"When I came last time, there were just tracks everywhere, all over the piece," Herd recalls. "So the buffalo just kind of hang out there, which is really pretty cool."

Like Kurtis, who has said of being at the ranch "You feel the pulse of the earth beneath your feet when you stand there," Herd feels an almost spiritual bond with the site.