Doing it his way

By By Chelsea O'Neal - coneal@ljworld.com

Ol' Blue Eyes is back.

At least his music is, and it's coming to a community theater near you.

"My Way ... A Musical Tribute to Frank Sinatra" opens this weekend at the Lawrence Community Theatre, kicking off the venue's 2003-2004 season.

The revue, which includes 50 of Sinatra's greatest hits, is a tribute to music that has spanned generations. The tunes are presented in medley form, although the show includes a few complete numbers, such as "My Funny Valentine" and "That's Life."

"My Way," first conceived by David Grapes and Todd Olson, is not an elaborate production. A cast of four does all the singing and acting. Sitting in a cabaret, listening to Sinatra's music, the four patrons reflect on what the singer has meant in their lives. Although most of the action consists of singing, the crooning is meant as a salute rather than an imitation of Sinatra.

"We were advised by the script not to try to make production numbers, but let the music stand on it's own," says Judy Heller, musical director.

The four-person cast is divided into two couples: the older couple, played by Jack Greenwood and Fran Hopkins, and the younger couple, Jennifer Forman and Kevin Stacy.

The actors, many of them Sinatra fans, were already aware of the importance of the star's music.

"Absolutely," says cast member Kevin Stacy when asked if he was a fan. "I have many CDs of my own at home, so that was kind of fun going into preparations." 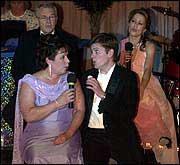 Rehearsing a scene from the play "My Way ... A Musical Tribute to Frank Sinatra" are, clockwise from left back Jack Greenwood, Jennifer Forman, Kevin Stacy and Fran Hopkins. The show, directed by Julie Noonan, opens Friday and runs weekends through Oct. 12 at the Lawrence Community Theatre, 1501 N.H.

The cast, whose own first names became their characters' first names, get to interact with the audience during the show. They all agree it's been pleasurable bringing the production to the stage.

"It's a very rewarding experience to work with people who know how to sing," Hopkins says.

The cast has been working hard putting the show together in time for opening night. They've had just six weeks from auditions to first performance, but they and director Julie Noonan say they've had few troubles preparing for the show.

Says Noonan, "I find less challenges with the smaller cast, especially when it is in such a nice environment."