By 4 p.m., at least 1,000 people had spread themselves across a field, sitting on blankets and lawn chairs as musicians performed on stage.

It was the first time the festival has been staged near Lawrence, and Dave and Debbie Morgart, who drove 150 miles from Andover, were pleased. The couple and their young children sat in front of their open beach shelter tent.

"This is a great set-up," Dave Morgart said. "I like the fact that it's in such a large, open area."

"The kids are having fun -- they've been dancing," Debbie Morgart said, referring to her two daughters, Hayley, 4, and Lauren, 6. "The weather is fabulous."

The festival got off the ground shortly after noon and continued until about 7:30 p.m. More people continued to arrive throughout the afternoon.

"We used to play together in Kansas City, in a band called Magnum Force," Manning said. 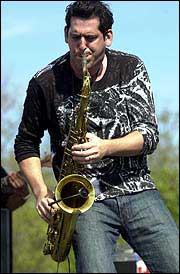 Steve Cole plays his saxophone during the first Midwest Jazz Festival to be staged at Clinton Lake State Park. Beautiful weather added to Saturday's portion of the weekend festival that includes live music, an international food court and other activities.

Manning lamented the loss of jazz festivals in Kansas City, Mo., but said he hoped Lawrence could step in and fill the void.

"Kansas City is supposed to be a jazz town, but we have to come here to Lawrence," Manning said.

Joe Carrington, founder and managing director of the jazz festival and a KU alumnus, was pleased with the opening day of the festival. He was hoping to draw at least 3,000 people for each of the two days. He also said Saturday afternoon was too early to make a commitment to bringing the festival back next year.

"We'll see," Carrington, a Lawrence native, said. "If Kansas really wants it I can do it, but they are really going to have to come out and support what I'm doing."

In addition to Brown, others performing Saturday were Brian Culbertson, Steve Cole and Boko Maru.

The festival resumes at noon today and will continue to about 7:30 p.m. Today's performers will be Down to the Bone, Mindi Abair, Ken Navarro and BMW.

The festival is being staged in an open field just south of the state park office. Ticket prices range from $28 to $65. A parking fee of $6.50 also was being charged.