That's less than half the viewers Miss America had as recently as 1995, and 1.7 million fewer than last year's telecast.

Pageant organizers and TV producer Bob Bain had hoped to boost ratings by injecting a new competition -- casual wear -- into the proceedings and by telling viewers, as the show went on, who won each of the individual competitions, which had never been done before. (Miss Florida Ericka Dunlap won the pageant.)

The innovations apparently didn't help, nor did some reality TV-style touches, including a live performance by former "American Idol" runner-up Clay Aiken and remote cut-ins from a Beaver Creek, Colo., viewing party hosted by Trista Rehn and Ryan Sutter of "The Bachelorette" fame.

Steven Miller, a Rutgers University broadcast journalism professor and longtime pageant observer, said the ratings indicate it's time for the networks to give up on Miss America entirely, having tried so many things to stem the loss of viewers.

"ABC is No. 3 in the ratings, and it can't afford this sort of anchor on the ship," Miller said. "Yes, it's Saturday night and yes, Saturday night is where you throw things to die. But this hurts ABC. It's time for them to cut the cord."

Pageant officials did not immediately respond to requests for comment. 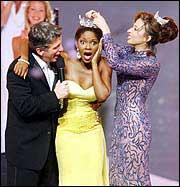 Miss Florida Ericka Dunlap, center, reacts as she is crowned Miss America 2004 by outgoing Miss America Erika Harold. Pageant host Tom Bergeron is at left. Despite the pageant's attempt to become more audience-friendly, ratings for the scholarship contest continued to slide this year.