'Twas the week before NHL and Tiger and all through the store, EA's appetizers arrived, Rugby, NASCAR and no more!

There's no denying that Rugby 2004 and NASCAR Thunder 2004 are a simple prelude to EA's more widely-appealing NHL and Tiger Woods franchises. But unlike Rugby, NASCAR is a polished effort perfect for the audience it targets. 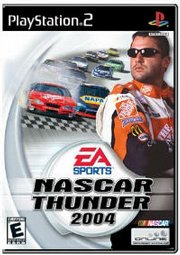 The freshest addition to the franchise this year is a new ally/enemy system that incorporates how you share drafts and who to block and enrage on the track. The 43 real drivers would be proud of the system's accuracy. Don't be too reckless, however, since you can easily turn allies into enemies with bad driving.

Thunder is truly feature-rich with a total of 70 drivers, 175 different cars, mini games, a great training mode, team management, car construction among many other modes to leave no skill unpolished.

Speaking of bad driving, the mechanics of turning haven't changed much which make controls a little tougher to get used to for fans of arcade-style racers. You must lead turns a good second or so before your inevitable lefts. This isn't a distraction more than it is a sign of racing simulation, not an exaggeration.

Luckily, the Thunder games incorporate fantasy tracks for those who think turning left 1200 times in a row is mind-numbing. The idea is to appeal to non-NASCAR fans, but the fantasy tracks aren't any reason to tear you away from the Burnouts and Gran Turismo's of the world.

The graphics get the job done with medium polygon car models. The stadiums are accurately recreated, although fairly murky. The soundtrack is phenomenal. High bit-rate samples of engines roaring and your pit crew taking you through the turns can get even non-NASCAR fans an adrenaline jolt every now and then.

PS2 owners have the luxury of racing online, but Xbox owners have prettier graphics to look at. If none of those matter to you, choose the controller you like best, as the versions are nearly identical.

NASCAR Thunder 2004 is a great update to the franchise and the only solid option for NASCAR fans.