Who would have thought Lawrence, Kan., would become a haven for sushi lovers?

Since 1999, when Richard and Mimi Moon opened Kokoro, a Japanese restaurant at 601 Kasold Drive, offering tableside (teppanyaki) cooking and a complete sushi menu, the popularity and availability of sushi in town has surged.

You can even find sushi among the meal choices displayed at The Market, the food court in the Kansas Union. Or you can pick up a small tray of assorted sushi at SuperTarget, Hy-Vee and Dillons.

How did bite-size tidbits made of seaweed, vinegar-seasoned rice and slivers of everything from raw tuna to smoked eel take over a formerly meat-and-potatoes kind of town like Lawrence?

Those in the sushi trade point to a few factors at work. Of course, there's the presence of a big university that draws students and faculty from around the world. Lawrence has a populace that is becoming increasingly sophisticated about food choices. And residents, like Americans generally, are showing a greater interest in dishes that are light and healthy, as well as offering a sense of adventure.

For many people these days, sushi fits the bill.

Like Ashley Bonebrake, 21, a Topeka senior at Kansas University.

She started eating sushi at Kokoro when it opened and hasn't stopped since.

"I like the texture, and I like that it's fairly healthy. You can eat a lot and not feel too full," she says, tucking into a plate of California Rolls stuffed with crabmeat, cucumber and avocado at Sushi Station.

"I've been here three times since it opened."

Much more than raw fish

Suken, the sushi expert who developed and launched Wa in December 2001 and is now a Japanese dining consultant at Sushi Station, has seen it again and again.

Strangers to sushi timidly taste a California Roll -- the sushi equivalent of a bicycle with training wheels -- and before you know it, they're smacking their lips over tender bites of eel and octopus.

Lisa Nguyen, who co-owns Sushi Station with her husband, Steve Nguyen, understands why some diners are hesitant at first to give sushi a try.

"Sushi is something you have to develop a taste for. Most people, when they hear 'raw fish,' they say there's no way. Even myself, I said that," she says.

Many people are unaware, however, that sushi isn't just uncooked fish. There's much more to it than that. In fact, the word "sushi" refers to a harmony of vinegar and cooked rice.

Sashimi is raw fish, eaten without rice. It's generally consumed at the beginning of a meal, before the sushi arrives.

These are good places for the first-time sushi eater to start, before moving on to the joys of buttery, translucent slices of rich tuna or the subtle heat of spicy salmon rolls.

Kokoro, which has developed a devout following in town, offers more than 30 types of maki sushi rolls and 23 kinds of nigiri sushi. One of the most popular items is the Kokoro Roll, which contains fried shrimp, imitation crab meat, cucumber, avocado and a special sauce.

"Sushi is kind of an addictive food," says Mimi Moon, the restaurant's co-owner. "At first, you don't know what the taste is. But gradually, you eat more and you like it."

Watch out for wasabi

Each of the restaurants offering sushi in Lawrence has its own distinctive style and choice of special dishes.

Suken at Sushi Station, for instance, has come up with fish "cocktails" that feature daikon radish, lemon, carrot, lettuce, ponzu sauce and a perfect rosette of tuna or other type of fresh fish, served in a martini glass. 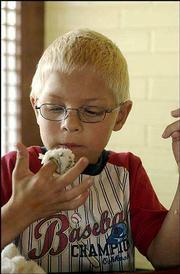 Sushi is proving to be popular with Lawrence residents of all ages. William Ruhe, 6, gets ready to eat a sushi roll at Sushi Station.

And Wa, owned by Soo Yang and Bok Hyeong Park, has its popular Zen Crunch: deep-fried spicy tuna roll covered with julienne vegetables and a honey-mustard-wasabi sauce -- an ample dish for $8.50.

David Malone, a waiter at Wa for a year and a half, has watched as interest in sushi has grown in Lawrence.

"Since I've started working here, the popularity has increased a lot, and word has definitely spread: We CAN have good sushi in Kansas," he says.

The Parks say business is steady, as customers are attracted to a food that is widely perceived as healthful.

That's why Anne Pilkington, 22, a KU senior from Tulsa, Okla., enjoys a good sushi meal now and then.

Beth Waite, a May graduate of Kansas University, and Carlos Casas, KU senior, enjoy a spicy tuna roll and a California Roll during their second visit to Sushi Station. Casas says he loves sushi, but hasn't convinced Waite to try raw fish. She still prefers cooked or vegetarian sushi.

"I never liked fish until I tried sushi. I like that it's healthy. It's a perfect meal, but you're not too full. You're satisfied," she says.

What advice would Jessica Roth, a Wa waitress, offer to those who are new to sushi?

"Wasabi is not avocado," she says of the spicy-hot, green paste that, with pickled ginger, typically accompanies sushi.

"Sometimes I just walk up to the table and people are sweating and drinking water."